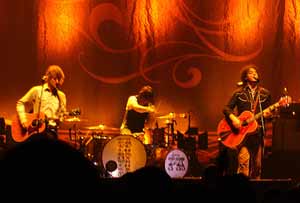 Well, I suppose it’s our own fault. In a move that echoes Radiohead’s surprise announcement of an impending album last fall, Jack White’s wear-whatever-colors-we-want band the Raconteurs have just announced via their website that they’ll release a new album, Consolers of the Lonely, next Tuesday on all formats. But unlike Radiohead, Jack White seems to be a little bitter about, ulp, music critics who jump the gun by reviewing promotional releases or leaks:

We wanted to get this record to fans, the press, radio, etc., all at the EXACT SAME TIME so that no one has an upper hand on anyone else regarding it’s availability, reception or perception… the Raconteurs would rather this release not be defined by it’s first weeks sales, pre-release promotion, or by someone defining it FOR YOU before you get to hear it.

Wow, and all-caps, even. That’s internet for shouting!

After the jump: critics, can’t live with ’em, can’t crush their heads in vices.

Seriously, though, are critics “defining” releases for people? Especially in this day and age, with the proliferation of tha bloggz, it seems like critics actually outnumber non-critics, so I’ve always personally felt that sharing my opinions about stuff is merely adding to the conversation (and also hopefully entertaining readers) … (insert cricket chirping sounds here). As an artist myself, I know that a bad review (or even a great review that maybe mentions one small quibble) can send me into a vodka-soaked depression, but that’s par for the course, and honestly I can’t imagine being bothered by an early review. Shouldn’t even an artist of White’s stature be pleased with the attention? So, this statement is pretty silly, and as the Guardian points out, “anti-marketing” is a marketing gimmick itself, and one that only bands who have benefited from the already-existing music industry setup are now free to utilize:

It’s a shame that it’s only really viable for an act which, including as it does Jack White, already possesses both presumed financial security and an existing audience. If nobody had heard of the Raconteurs, then without pre-publicity, they might as well shoot the album into space as release it to an oblivious public, regardless of format, date, content or the best of intentions.

Hey, don’t knock space aliens as a target demographic, I hear they love the Beatles. Anyway, the Raconteurs are generally pretty great, and at least they’re selling 320kbps mp3s of the new album on their own website, which, again, you can get next Tuesday, March 25th.