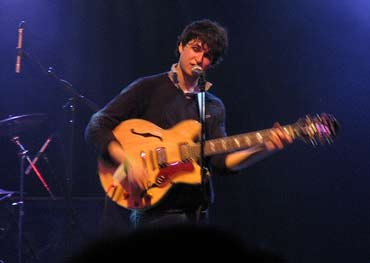 Appropriately enough, just getting to this show sucked the life out of me like a bloodthirsty Transylvanian. I’m happily relaxing with friends at around 9:15pm, having a spirited argument about Hillary Clinton and political dynasties, and I get a text message from Friend A: “R U cming 2 vamp?” I reply: “yes.” Friend A: “Show starts in 15.” “Minutes?” I reply. “Yes,” comes the answer. As I get my jacket on, another text comes from Friend B: “Can my girlfriend be your +1”? Er, I don’t have a +1. “Do you have the # of [Friend C who works at the label]”? I text it to him. Friend A texts again: “I’m here with [Friend D, lead singer of a notable Bay Area rock band], he says ‘hi’.” Okay. Friend C texts to tell me I now have a +1 and it’s for Friend B’s girlfriend. I arrive at the show, no sign of Friend B or the girlfriend. “Whr r u,” I text. “At the kebab place around the corner.” That kebab place is like 3 blocks away! “I’m here, band is on,” I text madly, as I hear the strains of “Mansard Roof” through the door. A woman bicycles up and asks the security guy if he saw anyone selling tickets. “Someone was selling a ticket for $60 earlier,” he says. “Do you think it’s worth it if I wait?” she asks, and he says, “nah, I wouldn’t.” Minutes and two more songs pass, and no sign of my friends, but then Friend C from the record label shows up and puts Friend B on the list anyway, and I can finally enter the venue.

I try not to judge bands by their fans. Beck shows have been known to draw swirly-dancing hippies, and Queens of the Stone Age often attracted fist-pumping roid-heads. Vampire Weekend, with their preppy clothes, witty lyrics, and jaunty Afropop-inspired melodies, are all about College Kids, and right next to me, the Really Annoying College Love Couple Who Never Let Go of Each Other During Their Oblivious-to-the-World Dance Moves That Run Into Everyone Around Them. Needless to say, I’m in a bad mood, and it takes a song or two to wear me down, but surprisingly, the band’s unrelenting cheer finally rubs off. “One (Blake’s Got a New Face)” inspires the crowd to sing along in a call-and-response, and the feeling is surprisingly intimate: Vampire Weekend are many things, but loud they are not.

Much has been made of how the New York band’s Afropop leanings are reminiscent of the Talking Heads, but while the latter always seemed to focus on an unrelenting groove, giving David Byrne a chance to explore more eccentric vocal styles, Vampire Weekend seem to follow along behind singer/guitarist Ezra Koenig, allowing for abrupt shifts in tempo and emphasis, an effect that would seem noodly in less assured hands. They launch into “A-Punk,” with its almost ska-like double time rhythm, and the crowd reacts excitedly, but politely: overdoing it at a show like this just wouldn’t be cool, although a couple fans did make it on stage to dance around.

Only a few minutes later, and the band were saying their goodbyes, promising to return to San Francisco soon, since they love this city, and I get the feeling they’re sincere. Friend C from the label says “they never do encores, they don’t have enough songs,” and sure enough, the lights come up and the capacity crowd starts to file out the door. Outside, someone shouts, in seeming disbelief, “It’s 10:30!!” People are milling around, oddly energized in the warmer-than-usual night air. When I kick start my old motorcycle, a cheer erupts from the crowd as if I’ve set off fireworks. What’s going on? Could Vampire Weekend have so much quirky charm and pop skill that they achieve that most remarkable goal: making a San Francisco crowd happy?

Pictures and video from the show over at Hippies are Dead.

Photo used under a Creative Commons license from Flickr user M Kasahara, and it’s actually from the LA show, sorry.