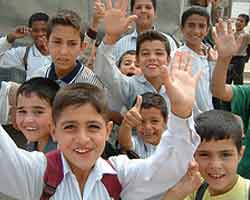 While other Iraq War reporters have spent the past five years interviewing soldiers, officials, and contractors, Education Week reporter Mary Ann Zehr has focused on a different group: schoolchildren, their parents, and teachers. It hasn’t been easy. Several Iraqi education ministry officials have been targeted and killed by insurgents. According to the UNICEF, Iraq’s school enrollment rate dwindled from 83 percent in 2003 to 50 percent in 2007.

Grim though the statistics may be, Zehr believes they’re only part of the story. Drawing on dozens of interviews, she has painted a vivid picture of how violence and chaos affect students’ daily lives. One lesson she has learned along the way: Kids don’t always deal with trauma in the ways you might expect. “One boy I met was totally focused on soccer,” says Zehr. “I asked him if he talked about the war with friends, or the fact that his dad had been murdered, and he said no. He wanted to talk about soccer moves. That’s it. He was focused on the future. But his mom was totally stressed out.”

Because of security concerns, Zehr has not visited Iraq; instead, she has spoken to students and administrators over the phone. But last month, Zehr made her second trip to Amman, Jordan, to see how nearly 50,000 Iraqi refugee children—some of whom had missed as many as four years of school since the invasion—were coping with school in a new country. Mother Jones spoke by phone with Zehr last week about her trip to Jordan, the news from schools in Iraq, and how the U.S. government left Iraqi schools behind in 2006.

Mother Jones: What is the situation like now for Iraqi children in Jordan?

Mary Ann Zehr: I didn’t know, until I went to Jordan, how many kids had been out of school for up to four years. In some cases, kids didn’t know how long they had been out of school. Their parents had a clearer sense of time. And some Iraqi refugee families don’t always send all of their children to school once they get settled in a new country. One woman had four school-age children in her household, two of her own children and two grandchildren. She sent one boy to school, but didn’t have enough money to send a girl who had missed four years of school. In another case, a family sent the youngest girl, but not the oldest, saying they couldn’t afford it.

MJ: What was it like for the school children you interviewed to go back to school, in a different country, after being out of school for several years?

MAZ: One boy was a little shaky on his time tables in fifth grade, and he had missed two years. His mom said he was unhappy because he was placed in first grade instead of third, and it was hard for him to be with younger kids in class all day. Another 16-year-old boy was in fifth grade, and the principal said he acted like a tough guy. Kids often said they didn’t like going to school with younger kids. Other kids might be placed in their grade, but they wanted to be placed in younger classes. It is hard to know what is best for each kid.

MJ: Meanwhile, back in Iraq, you’ve reported that there is a “culture of fear” in schools.

MAZ: Teachers and parents who came to Amman within the last year or two told me the quality of schooling in Iraq had deteriorated. One father said militias were in control of Iraqi schools. A teacher said that school administrators had lost their ability to discipline students, and they didn’t know which groups parents were involved with. The cultural attaché for Iraq in Jordan didn’t deny that militias had taken over schools, or that there were kidnappings.

MJ: How do children respond when you ask about the experiences they’ve had to endure?

MAZ: Some children really did want to tell their stories. One girl who had to stay home and not go to school said she cried about it, but didn’t want to make her parents feel guilty. She told me she saw her uncle killed right in front of her in her dad’s store. And she wanted to talk about it. She was now in Amman, several years later, and several years held back, but doing well. Another girl had missed so much school in Baghdad that when she took a history test, she only knew half the material, and failed. Asked how that made her feel, she started crying on the spot. It seems that many kids seem to take on responsibility for the fact that they missed school. A lot say they had missed two years, but actually they had missed four, almost like it was their fault.

MJ: In June 2006 the United States decided to withdraw financial support for Iraqi schools. Why?

MAZ: Right after the invasion, the U.S. was helping to rebuild the education system. The U.S. helped to repair like 5,000 schools in Iraq, and it got a lot of media attention. I followed that very carefully. They helped to train teachers, provided furniture, and printed textbooks. They did all this after the invasion, but then, very quietly, they stopped in June of 2006. There was money allotted for advisers at 10 ministries, but in the end, the education ministry wasn’t one of the ministries that got such an adviser. Projects were scaled back because of security, bureaucracy issues, delays in approvals, and so much turnover in the ministry of education. It became increasingly difficult for me to get an interview, and people would only respond by email, if at all.

MJ: You believe that Jordan’s public schools are Iraqi children’s best chance for an education. How so? What about other neighboring countries?

MAZ: I know the majority of Iraqi refugee school children are in Syria and Jordan, and some are in Egypt and Lebanon. A public relations person I spoke with from the Syria office of the United Nations High Commissioner for Refugees said Iraqi refugee families tend to lie low, because their problems from Iraq follow them to Syria. One family saw someone in a marketplace who had raped someone in their family back in Iraq. So they wanted to lie low in Syria and go unnoticed. People have stress and issues that have followed them to their new country. Poverty is a real issue also. In Jordan, the nonprofits said children tend to find work more easily than adults. They become apprentices to carpenters, and things like that, but bosses can be abusive, and children tend to be paid really low.

MJ: Do Iraqi children talk about career goals? Do they think in terms of, “When I grow up, I want to be a…”

MAZ: They do. They want to be engineers, doctors. One boy, out of school for four and a half years, is now attending school for two or three hours a day and said he wanted to be an engineer just like his dad. They felt that if they were assigned exams, they could reach their goals, and I think they can, just maybe two years later.