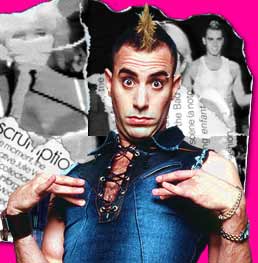 What I wouldn’t give to have seen this. Apparently, Kansas is the first known location for Sacha Baron Cohen’s new movie Brüno, the “sequel” to Borat: Cultural Learnings of America for Make Benefit Glorious Nation of Kazakhstan, and the expected run-ins with the local populace have started to hit the news. Dateline: Wichita, and the amazingly-named Mid-Continent Airport (like, why not just call it “Bumfuck Airplane Place”?). The Bruno people got permission to film inside the airport, reportedly claiming to be from German TV, as one does (although Brüno is supposed to be Austrian). Things seemed fine, until they turned their cameras on, according to the Wichita Eagle:

The film crew tossed off their coats and did some “kissing” and “fighting” in the hallway leading to the security area at the airport. The security officer called his chief. His chief watched the live security surveillance and reported that no laws were being broken. “At that point, we didn’t feel like we had any law enforcement issues,” said [assistant director of airport operations Brad] Christopher, who was dealing with the situation that day. But it was “inappropriate,” he said. Christopher asked the crew to leave, and the crew left peacefully. “We felt like we were deceived, lied to about the intent and what their true intents and plans were for this film,” Christopher said. He said several other locations in Wichita were also targeted.

So, other than “kissing” and “fighting,” what, exactly, was inappropriate?

Well, it might have been the hot pants: The UK Sun reports part of the problem was that a “European man” was “stripping down to tight shorts and dancing in the lobby.” Sure sounds like Brüno. There are also reports the crew disrupted an Easter play at a Topeka area church by attending the event in “chains.” No more details on that little adventure.

If you’re reading this, Sacha, allow me to recommend another location: Nebraska, just a few miles to your north. It’s probably a little less homophobic than Kansas, but hey, my relatives could be in the movie!

IMDB has October 2008 release dates for the Brüno movie in Finland and Norway, and a December date for Brazil and the Netherlands. No official word on a domestic premier.