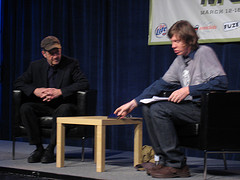 Austin during SXSW is a whirlwind of tattoos, cigarette smoke, amplifiers, bratwurst, fliers, long lines, nonstop (loud) music, bad pizza, and a ton of local volunteers who are super friendly but don’t often know the answer to your questions. It’s chaotic, noisy, and exciting, and it never takes breaks. Here’s how my first 17 hours here went:

After hearing Lou Reed talk about high (and low) art, Thurston Moore, the tall Sonic Youth frontman discussed improvisation with composer Steve Reich, who looked at his watch a lot and whose mostly short, rushed answers didn’t do justice in explaining a wicked long and impressive career in minimalist composing and performance. Man, the guy’s even a minimalist interviewee.

I hung out with some locals mid-day, some of whom making strong arguments that short, tight men’s cutoff jeans shorts are making a come-back. I thought this would be my chance to hear some “Man, SXSW is annoying as hell when you live here!” comments, but never did. These chain-smoking folks were just as excited to see bands as their geekier/bloggier tourist counterparts.

An early evening screening of The Upsetter, documentary film on dub reggae pioneer/anomaly Lee Scratch Perry was entertaining, and provided old footage of Scratch I had never seen before, but ultimately didn’t create a great narrative about him. It felt detached, and even a year’s worth of hanging out with reggae’s bizarre elder statesman (by the filmmakers) didn’t produce much insight into where that bizarre-ness really comes from, let alone Perry’s craftsmanship as a dub reggae producer. I saw two women walk out of the theater during the film as the rest of the crowd laughed at Lee’s crazy, unexplained antics. Not sure if they were insulted by the content or just had to use the bathroom.

Money Mark, longtime Beastie Boys’ keyboardist and collaborator, performed a set around 11 p.m. that, for me at least, was a great example of how a festival like SXSW can totally kick ass. At the onset of the first song, none of his guitar pedals were working, his guitar cord was crackling, a cassette tape player wasn’t playing the intended sounds, and he (seemingly) could not remember a lot of his own lyrics.

He could have stopped the show, stormed offstage, or taken 20 minutes to fix the situation, but instead he rolled with it and generally just made a bunch of stuff up onstage. He invited a friend up to make noise with a Theramin. He played noisy, dischordant guitar solos. He let the band vamp out for long stretches of time while he muddled around, tinkering with any sound-producing device he could get his hands on. It was total improvisation; some of which worked, some not so much. But the crowd stuck around for the whole thing! There were no booos, and no heckling. There were some puzzled looks on people’s faces, but everyone kept tossing back brewskys and clapped at the end of every song in full support. To me, that is one fine show.

All in all, not a bad first day.