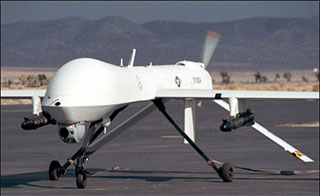 in 2004, when an American missile fired from a Predator drone killed Taliban leader Nek Mohammed, an observer told a journalist that the bombing was so exact it “didn’t damage any of the buildings around the lawn where Mohammed was seated.” It was an endorsement, if ever there was one, of the Bush administration’s post-9/11 efforts at assassinations using what are known as decapitation attacks.

The practice, which is shrouded under a veil of intense secrecy, is generally regarded as warfare’s answer to laser surgery: clean and accurate, cheaper than waging a protracted ground battle, and less risky for American troops. But in reality, these premeditated and narrowly focused air bombings often fail to kill their intended foe and hit civilians instead. “It’s much more difficult to hunt people with a 2,000-pound bomb than people realize,” says Marc Garlasco, who until 2003 was one of the Pentagon’s leading analysts of air strikes, including assassinations.

During the invasion of Iraq, Garlasco’s job was to analyze targets with an eye toward minimizing collateral damage using a software program called Bugsplat. Days after Baghdad fell, Garlasco, intent on examining firsthand the military’s success or failure in sparing civilians, accepted a position with Human Rights Watch (hrw) and traveled to Iraq to do just that. Among the sites he studied was a Basra neighborhood where the United States dropped bombs meant for Lt. General Ali Hassan al-Majid—nicknamed Chemical Ali because of his role in gassing tens of thousands of Kurds. Garlasco had watched the bull’s-eye attack live on video transmitted from a Predator drone. “We cheered when the bomb went in,” he says.

But Chemical Ali survived, and witnesses told Garlasco that they’d never seen him in the targeted location. As part of his investigation for hrw, the analyst met a 50-year-old laborer whose home was destroyed in the attack, killing seven family members. He found that 10 neighbors had also died. “When I stood in the crater and I was talking to the survivors,” Garlasco says, “it wasn’t so cool anymore.”

Assassinations by air are a relatively new tactic in warfare. Only in the past quarter century has the United States developed munitions accurate enough to attempt a surgical strike against a target as small and mobile as a person. “Fire and forget” laser-guided Hellfire missiles were first used by the American military in Panama in 1989; jdams, or guidance kits that convert regular bombs to smart bombs, weren’t employed until 1999 during the nato bombing of Yugoslavia; armed MQ-1 Predator drones came online in 2002 as part of Operation Southern Watch in Iraq. And of course, recent decades have brought dramatic advances in computer, satellite, and GPS technologies.

In the past, legal restrictions also prevented decapitation attacks. Since 1976, when it was revealed that the cia had made repeated attempts on the life of Fidel Castro, every American president has issued an executive order banning political assassinations. This ban, however, never applied to leaders with whom the United States is at war, and so the military has launched strikes against Saddam Hussein, Slobodan Milosevic, and Osama bin Laden, among others.

In his first speech after 9/11, President Bush promised to hit terrorists with “dramatic strikes visible on TV and covert operations secret even in success.” Since then, the administration has argued that the war on terror’s battlefield is global, and it has expanded decapitation strikes accordingly—aiming them at targets across the Muslim world.

virtually all aspects of the assassination program are classified, and so information about it has emerged only in bits and pieces. In January 2006, the Los Angeles Times reported that unnamed officials had confirmed that Predator drones bearing Hellfire missiles—the preferred weapon in decapitation bombings—had hit “terrorist suspects overseas” at least 19 times since 9/11. “The Predator strikes have killed at least four senior Al Qaeda leaders,” according to the Times sources, “but also many civilians, and it is not known how many times they missed their targets.”

There have been media accounts of at least nine other such strikes in Pakistan, Yemen, and Somalia, where members of Al Qaeda are thought to be hiding. Dozens more have been conducted in Afghanistan, according to William M. Arkin, a military expert and author of the Washington Post‘s Early Warning blog. In Iraq, the military claims, more than 200 Al Qaeda operatives have been eliminated by air strikes, be they targeted killings or broader-based attacks.

“The sense in the military and in Washington, D.C., is that U.S. efforts to hunt Al Qaeda are succeeding,” says Congressman Adam Smith (D-Wash.), the chair of the House subcommittee responsible for unconventional warfare and special operations. “Most people understand that there are risks—of collateral damage or [retaliation].” The upside, he says, is the degree to which targeted bombings disrupt Al Qaeda’s operations. “They can’t just pick up the phone. They can’t do a wire transfer without thinking, ‘Is this going to be something that they’re going to pick up on?’ There have been a number of these guys just walking down the street, and BOOM! They didn’t know we knew them, and we wiped them out. That puts Al Qaeda’s supporters back on their heels.”

Or, as a U.S. diplomat who requested anonymity put it, “Aside from the fact that we spend hundreds of millions of dollars per head chasing high-value terrorists, I think it’s good for these guys to know they’ll be hunted forever. It’ll make people think twice about committing terror against the U.S.”

Bravado aside, of course, the fact remains that “bringing a Hellfire missile onto a house in a remote village of a remote country is an incredibly laborious and expensive operation,” as Arkin puts it. Intelligence is generally limited; the military may be working from a blurry photo or composite drawing. In 2001, U.S. officials mistook a convoy of elders headed for Afghan president Hamid Karzai’s inauguration for a Taliban group and bombed it, reportedly killing some 20 civilians. In Iraq, U.S. warplanes tried to hit Saddam and his deputies based on their sat-phone signals, though these only pinpoint a phone to within about a city block. hrw found that not a single air strike aimed at Saddam’s henchmen during the invasion achieved its objective, and instead, dozens of civilians were killed. The “complete lack of success and the significant civilian losses” showed a disregard for civilian casualties, in violation of the laws of war, the organization concluded.

Despite advances in technology, planning targeted bombings depends on gathering reliable human intelligence, notes retired Colonel Tex DeAtkine, a Middle East expert who trained Special Operations Forces for more than 18 years. “You just don’t get brothers, uncles, and nephews to rat on each other,” he says. The United States may get false tips from informants looking to eliminate local rivals. When a promising tip is obtained, it can take days or even weeks to verify and act upon—and targets rarely stay put that long. In 2006, an attempt to kill Ayman al-Zawahiri in Pakistan instead killed 18 civilians. Later, intelligence revealed that the Al Qaeda deputy had moved to a new location two hours before the bomb detonated.

The military is working to reduce collateral damage, for example by more often conducting “pattern of life analyses” before launching strikes. This may involve gathering information from satellites and also from operatives who secretly track the daily patterns of intended targets, at least in places where they are safe enough on the ground to do so. But here there is a catch-22: Civilian deaths breed so much ill will, they make it harder to gather the very kind of intelligence needed to better target future attacks. “Let’s say you have dropped a bomb and killed four terrorists on the first floor, but on the second floor you wipe out the grandchildren of the senior tribal sheikh,” explains retired Colonel T.X. Hammes, a Marine Corps counterinsurgency expert. “Then you’ve actually created a problem.”

essentially carried out by remote control, targeted killings evoke novel human rights questions. Without soldiers on the ground to make moment-by-moment evaluations, the burden of complying with the laws of war would appear to reside with commanders or intelligence sources, explains Gabor Rona, the international legal director of New York-based Human Rights First. “The fundamental rule remains,” he says. “Targeting decisions must be made with a view toward minimizing civilian casualties. Anything less is a war crime.”

That argument hasn’t gotten much attention in the United States—unlike in Israel, which has been carrying out these sorts of operations for at least 15 years. Between 2000 and 2006, nearly 300 suspected terrorists were killed along with 129 civilians. That led Israeli human rights groups to file a lawsuit against the government in 2002. They argued that according to Israeli and international law, the practice constituted an illegal use of force equivalent to police shooting people instead of arresting them.

In December 2006, the Israeli Supreme Court issued a landmark decision in the case. While the court stopped short of an outright ban on Israel’s assassinations program, it ruled that international law constrains the targeting of terror suspects. Currently, in order to justify a strike, Israel must have reliable information that the suspect is actively engaged in hostilities (such as planning a terrorist attack) and must rule out an arrest as being too risky. The court also requires that there be an independent investigation after each strike.

“It is when the cannons roar that we especially need the laws,” the judges wrote. According to Joanne Mariner, an attorney with hrw, American watchdog groups haven’t attempted to legally challenge air assassinations because U.S. courts are typically reluctant to restrict the president on matters of national security.

And so, lacking concrete information, the public is left to take the American military’s word regarding the program’s breadth and efficacy, says Jennifer Kibbe, an expert in intelligence at Franklin & Marshall College. Under the Intelligence Authorization Act of 1991, the president is required to sign off on covert missions, and key congressional committees must be notified. But the administration has argued that those requirements don’t apply in the war on terror. “The military is acting as judge, jury, and in some cases executioner,” notes Kibbe. “And no one else is checking.”

[Research for this article was made possible in part by support from the Pulitzer Center on Crisis Reporting].