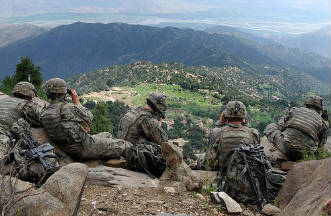 The GAO has released a new report (.pdf) that takes federal agencies to task for not coordinating their counter-terrorism efforts in Pakistan’s Federally Administered Tribal Area (FATA)—the mountainous, fiercely independent border region where Osama Bin Laden is believed to be hiding and where Al Qaeda and Taliban insurgents have begun to rebuild their operational strength. The report, titled “Combating Terrorism: The United States Lacks Comprehensive Plan to Destroy the Terrorist Threat and Close the Safe Haven in Pakistan’s Federally Administered Tribal Areas,” is the first in a series that the GAO plans to release in the coming months, documenting American missteps in the region and suggesting fixes that might jump start a more focused strategy.

An excerpt from today’s release:

The United States has not met its national security goals to destroy terrorist threats and close the safe haven in Pakistan’s FATA. Since 2002, the United States relied principally on the Pakistan military to address U.S. national security goals. Of the approximately $5.8 billion the United States provided for efforts in the FATA and border region from 2002 through 2007, about 96 percent reimbursed Pakistan for military operations there. According to the Department of State, Pakistan deployed 120,000 military and paramilitary forces in the FATA and helped kill and capture hundreds of suspected al Qaeda operatives; these efforts cost the lives of approximately 1,400 members of Pakistan’s security forces. However, GAO found broad agreement, as documented in the National Intelligence Estimate, State, and embassy documents, as well as Defense officials in Pakistan, that al Qaeda had regenerated its ability to attack the United States and has succeeded in establishing a safe haven in Pakistan’s FATA.

No comprehensive plan for meeting U.S. national security goals in the FATA has been developed… Neither the National Security Council (NSC), NCTC, nor other executive branch departments have developed a comprehensive plan that includes all elements of national power—called for by the various national security strategies and Congress. As a result, since 2002, the U.S. embassy in Pakistan has had no Washington-supported, comprehensive plan to combat terrorism and close the terrorist safe haven in the FATA. In 2006, the embassy, in conjunction with Defense, State, and U.S. Agency for International Development (USAID), and in cooperation with the government of Pakistan, began an effort to focus more attention on other key elements of national power, such as development assistance and public diplomacy, to address U.S. goals in the FATA. However, this does not yet constitute a comprehensive plan.

Given the lack of an overall strategy, the GAO goes on to recommend that the White House, the National Counter-Terrorism Center, USAID, the various intelligence services, and the departments of State and Defense “”work to develop a comprehensive plan using all elements of national power to combat the terrorist threat and close the associated safe haven in Pakistan’s FATA region.”

Now, is it just me or does this seem a bit late? Going on seven years since the attacks on New York and Washington… and after all of the subsequent debate over the U.S. government’s disjointed approach to dealing with Al Qaeda in the run up to 9/11, the stove-piping of intelligence information, and the overall lack of communication between various parts of the executive branch… it seems we still can’t get our federal agencies to play nice.

But fret not, for Congress is on the case. Earlier today, Rep. Howard Berman (D-Calif.), chairman of the House Foreign Affairs Committee, announced a hearing to be held May 7, where members will examine the GAO’s findings and “discuss actions that a new U.S. administration can take to reconstitute our foreign policy in this region, to refocus our efforts on eliminating terrorist threats there, and to rebuild our relationship with the Pakistani people.”