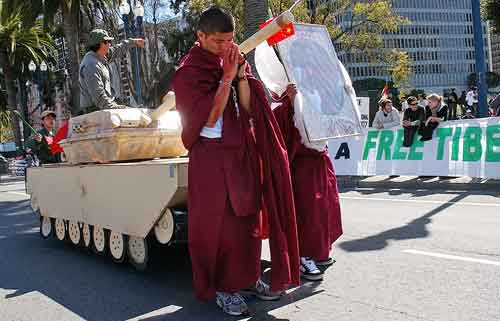 Hear the subject of this photo, and others in the photo essay, speak here. Read more coverage of the torch relay events by Mother Jones reporter Josh Harkinson here and here.

In a day of raucous protests and angry confrontations, human rights activists stalked the Olympic torch through the hilly streets of San Francisco in an elaborate game of cat and mouse. As planned, the torch was lit shortly after 1:00 p.m., but a phalanx of bodies clogging the streets prevented it from proceeding down the anticipated route along the downtown shoreline. Instead, a different torch was driven across town to Van Ness Avenue, a rolling artery that divides the city, where it proceeded towards the ritzy Marina District under the heavy cover of SUVs and motorcycles.

Shortly before the relay was scheduled to begin, a group of pro-Tibet activists blocked a bus that they believed to hold the torch. Laying down in the street as the driver and passengers made calls on cell phones, the activists draped themselves in Tibetan flags and chanted, “Long live the Dalai Lama!” The bus windshield had been smashed into a spider web but police wouldn’t say who’d caused the damage. A few minutes later a man in an orange bandanna flashed a text message on his iPhone, announced that the torch was elsewhere, and some of the crowd dispersed.

Throughout the day, activists who’d poured in from around the country relied on text messages to keep time in a complicated dance with police. When a text announced that the relay had been relocated, I hopped on a bicycle and followed a demonstrator as he pedaled down a hill with a Tibetan flag fluttering behind him. We passed throngs protesters sprinting towards the new torch route. After awhile I asked if he knew where he was going and he said, “I have no idea, I’m from Minnesota.” Even so, he found the new relay route in a matter of minutes.

Many protesters who gave up the chase took out their frustrations on a large group of pro-China demonstrators. Looking at times like opposing rugby hooligans, groups wrapped in Chinese and Tibetan flags squared-off on the street in protracted shouting matches. When a pro-Tibet protester shouted, “They will pop your head with a tank in China!” a young man with a Chinese flag painted on his cheek shot back: “Don’t make use of the Olympics, terrorists!” By the end of the day several minor scuffles had broken out, but as of press time no major injuries were reported.

Many pro-China demonstrators had been bused to the event by the Chinese Consulate and Chinese-American groups from as far as Los Angeles and carried identical-looking signs and flags that suggested a coordinated effort to promote China’s message. Still, others were native to the Bay Area and had come on their own. Chinese officials had chosen San Francisco for the torch’s only stop in North America in part because of its large Asian populations and strong ties with country. Hongyu Li, the owner of a solar panel business in nearby Palo Alto, wanted to prevent the same kind of disruptions that plagued the torch relays in Europe. He wore a trucker hat with an image of the Chinese flag on the front. “I’m kind of angry,” he said. “I think a lot of people are here because of what happened in London and Paris.”

Demonstrators with Save Darfur, who’d adorned a section of the supposed torch route with green signs and green balloons, looked like they’d wandered out of a Saint Patrick’s Day parade. They mostly declined to join the Free Tibet protesters in acts of civil disobedience or nationalistic shouting matches. Wearing a traditional Jalabiya robe and clutching a makeshift Olympic torch of his own, Sudanese refugee Mohamed Yahya told me the Sudanese army burned his village and killed most of the 1500 residents, including his family. In the years since, China has fueled the genocide in Darfur by buying the country’s oil and selling it arms. He scoffed at the idea, expressed by many pro-China demonstrators, that the Olympics shouldn’t be politicized. “It is not only a time to use the Olympics as a symbol of unity,” he said, “it is time to use them to save the lives of the people of Darfur and Tibet. Only then can we celebrate the Olympics in Beijing.”

Throughout the day it often seemed that some San Franciscans, being San Franciscans, had shown up simply to carry on the city’s grand tradition of protest. Along the route, a three piece brass band played a morose polka for no apparent reason. A pro-China demonstrator waved a makeshift sign, fashioned from a golf club, that mentioned Iraq and deception and was topped off by a large stuffed teddy bear. And the recreation of the original naked Grecian torch relay was all the buzz (though, like the main relay, hard to find).

Even here in San Francisco, though, some activists complained of civil rights violations. The San Francisco Chronicle reported that protesters were turned away from some locations but police disputed the assertion. And the sudden, unannounced change in the route angered the ACLU, which on March 13th had filed an open records request seeking a map of the relay route and any changes as they became available. “We are dismayed by what appears to be an unnecessary and unconstitutional end run around the First Amendment,” Maya Harris, Executive Director of the local chapter of the ACLU, said in a press release. “If the route was changed at the last minute because of serious threats of violence, that would be one thing, but we have serious concerns that the route was changed to avoid the protesters.”

Of course, some of the protesters were impossible to avoid. Near the end of the relay, a torch bearer suddenly unfurled a Tibetan flag, according to a text message sent out by Free Tibet. As other protesters began to catch up to the torch along its new route, the closing ceremonies were canceled and the torch whisked off to the San Francisco airport. Loaded onto a China Airways flight, it will land in Buenos Aires, still flickering enough to start another fire.