Greetings from a rental house in La Quinta, California, where we’ve just returned after enjoying day one of the 2008 Coachella Festival in Indio. Unfortunately this year’s Riff coverage will be a bit of step down from last year’s, since we’re not only absent intrepid photographer Kristi who got so many great shots last year, but we also couldn’t get a photo pass (“why didn’t you ask earlier,” they said). So unfortunately, we’re stuck with what I could capture myself, with my trusty Canon Powershot. Yeah, I know. Hopefully the word pictures painted within will be vivid enough to make up for it. 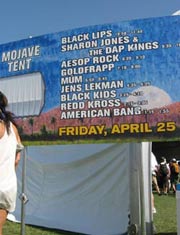 With many calling this year’s lineup a bit lackluster, our emotions were somewhat subdued as we entered the venue. The eco-awareness tent was placed right by the entrance, this year topped with a complicated wooden construction, which some of us suggested could be burned at the end of the weekend. It takes a gargantuan effort to rip oneself from the comfort of the pool and get to the venue before 3pm, and as we walk in, we just catch the tail end of one of my favorites, British avant-rock combo Battles. They’re playing the single, “Atlas,” and despite the fact that it’s an atonal triple-time stomp with screeching, incomprehensible vocal noises over the top, the crowd is really into it, cheering wildly as they leave the stage. 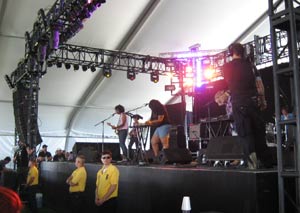 Off to a slightly larger tent for Black Kids (left), a band whose Pitchfork approval caused am almost immediate hipster backlash. It’s understandable: these are clearly “kids,” copying the Cure, and not always well. They’re not exactly accomplished instrumentalists, plus the singer is kind of like the Jackson Pollock of vocalists, splattering his voice every which way in the hope that he’ll hit a note or two. Despite all this, when their songs are good, they’re surprisingly charming: single “I’m Not Gonna Teach Your Boyfriend How To Dance” has a defiant edge and a propulsive beat, and the crowd disappears after it’s done. 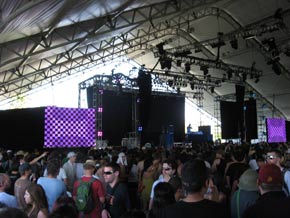 Over in the dance tent, Daft Punk tourmate and Ed Banger posse-member Busy P is playing a remix of DJ Shadow’s “Organ Donor” called “Organ Grinder,” an apt description for its bass noise, which is like two giant metal plates grinding together. He drops in just a note from Justice’s “Phantom,” and the crowd goes wild: maybe the LA Weekly was right about who the most popular artist on the lineup is. No matter what, 4pm is too early for techno, so I head off to investigate solo artist Dan Deacon. The sound emanating from the tent is an awful, distorted noise, barely discernable as music; Deacon usually performs from a spot in the crowd, and I can see a row of hipsters on the stage pointing cameras in that direction, so I guess he’s down there, but could somebody tell him his levels are a little hot?

Speaking of hot, at this point, the heat level is at “griddle.” This year’s fashion trend seems to be a reaction to the temperature, and people seem to be wearing even less clothing than usual. Here I am in my black T-shirt and jeans trying to look cool, and you’re just wearing a pair of Versace boxer shorts? (Okay, he was the exception). Suddenly I spot a woman dressed entirely in fluorescent colors: glasses, headband, dress, shoes. I wasn’t fast enough with the camera, but here’s an artist’s rendition: 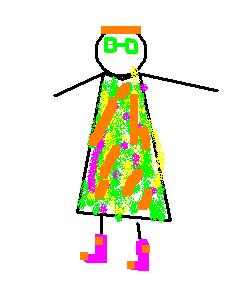 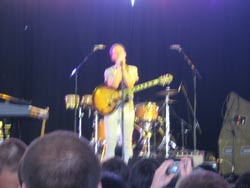 It’s 4:30, and Jens Lekman (right) is taking the stage, a slender Swede whose plaintive, swinging tunes have a wry melancholy, like a blonder Stephen Merritt. “I am leaving you,” he sings without accompaniment to open the show, “because I don’t love you.” Harsh! He’s not without a sense of humor, however, bringing in Chairmen of the Board’s “Give Me Just a Little More Time” at the end of a soundalike track. It’s twee, for sure, but kind of nice. 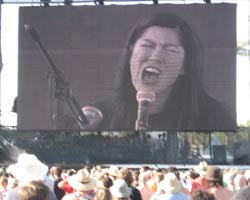 Over on the main stage, Kim Deal (left) and the Breeders are tuning up. The sun is getting lower in the sky, but the heat level is up to “toaster oven.” They kick off with the first track from their new album, Mountain Battles, and get through one or two shouts of “I can feel it,” before Kim brings the song to a halt and cheerily tells the audience, “sorry, we couldn’t feel it,” before starting over. They’re shambolic and sloppy, and Kim seems kind of drunk. Do they know this isn’t a rehearsal? 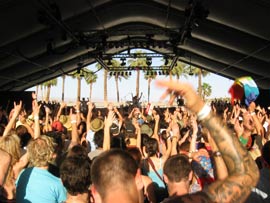 I abandon the Breeders for Cut Copy in a side tent, the Australian combo whose combination of ’80s electro and indie guitar sounds cliché but is actually pretty fantastic. Their most recent album, In Ghost Colours, is in heavy rotation at my house, and their music seems perfectly suited for a late-afternoon crowd: songs that start off kind of mellow, then erupt into hands-in-the-air choruses (see at right). The lead singer exhorts us to “get crazy,” and somebody is waving a crutch in the air with a scarf tied to it. Heat Level: Kiln.

As the sun sets behind the mountains, it’s time to hit up the VIP corral. On our way we grab a friend who’s been watching Vampire Weekend at the second stage, and he says he saw Elijah Wood. In the VIP tent, somebody from “Reno 911” walks right in front of us. The celebrity level seems a little down from previous years, but hey, it’s only Friday. 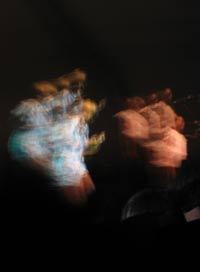 As it gets dark, The Raconteurs take the main stage to a cacophony of guitar noise and screeching echoes. Despite the fact that everyone else in the band is clearly talented, Jack White is such an otherworldly genius, he utterly dominates the band, and it kind of turns into The Jack White Show. Not that there’s anything wrong with that, but we kind of want to check out up-and-comer Santogold (left), a Brooklyn-based singer many are calling the new M.I.A.. She’s got a similar setup, with a DJ and backup dancer/singers, but boy are these backup singers awesome: they stand stock still behind sunglasses until erupting into athletic dance moves with military precision. Santi’s “hit,” “Creator” (which I wrote about back in September) is a throbbing inversion of dancehall, with a huge, thumping beat, and when the DJ starts it up, the crowd is completely ecstatic. 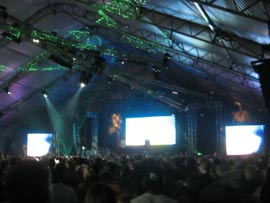 Afterwards we head to the dance tent to check out legendary (and reclusive) British experimenter Aphex Twin, and we can’t even tell if he’s DJing at first. Then we spot a face and an arm, just above the DJ console. Is that him? Is he hiding? What is going on? Aphex Twin has like 15 great songs, but instead we’re hearing irritating old drum ‘n’ bass and watching the top of someone’s head. An enthusiastic dancer next to me is covered in flashing LED lights. We’re out of there.

Over in a side tent, Aesop Rock is rocking a good-sized crowd; he tells the DJ to “take us to space,” and he complies with a twittery, cosmic beat. “Kill… television,” the rappers shout, to the crowd’s approval. Can we keep “Battlestar Galactica”?

Back on the main stage, England’s The Verve emerge to a subtle, orchestral intro, but then explode into their signature wall of dark noise. With Richard Ashcroft’s distinctive voice ringing out over the top, their music is oddly appropriate a night under the desert sky, despite its likely genesis in very different weather conditions. Ashcroft has aged well, with a little more meat on his bones and a standard-issue haircut, and his voice is clearer than ever; their B-level tracks like “Lucky Man” and “Sonnet” are kind of same-y, but “Bittersweet Symphony” is a transcendent song, and it brings everyone around me to their feet, swaying along (possibly drunkenly) to the hypnotic violin melody, stolen from the Stones.

Sorry Jack Johnson, but even your biggest fan in our posse is worn out (promise it’s not me), and we start the endless trek to our car, out in the farthest parking lot. The heat’s gone but the dust and grit are in full effect. Can we survive two more days, especially since must-see artists like Portishead, Prince, Kraftwerk and Justice are night-closers on Saturday and Sunday? Why can’t we get a helicopter pickup at the Churros stand?

Check back on the Riff for my Coachella Update on Saturday night to see if Prince was worth the nearly 5 million dollars he apparently is getting paid, and Sunday night to see how long we lasted.