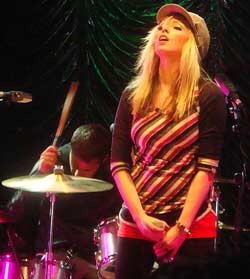 The organic, gritty sound of your favorite band, strumming out their rockin’ jams on stage: nothing could be more purely live, more essentially human, right? Well, recently it seems like the line separating a live show from, say, a movie, or, um, a pre-programmed roboticized fantasia, has become more and more blurred. Just a few weeks ago, up-and-coming UK duo The Ting Tings opened for The Duke Spirit at Rickshaw Stop here in San Francisco, and I had mixed feelings about their performance. On the one hand, they make incredibly catchy, exciting, playful music, and both members are clearly accomplished musicians and singers. On the other hand, they made no effort to disguise the fact that they were playing along with a backing tape. For instance, during the chorus of their current single “Great DJ,” the sound stepped up a notch, with a second guitar line and possibly extra percussion filling things out. However they did it, it was performed flawlessly—the “taped” material was never out of synch, and it definitely made the songs richer, more intense. Parts of the crowd responded, dancing and singing along. But others seems to hold back, more so than even a typically stand-offish SF audience; did people have a sense of being “had”?

After the jump: video, and a graph!

Here’s a video of The Ting Tings performing “Great DJ” for a BBC special, and this debate continues in the comments section on the YouTube page: one angry viewer demands to know “where all the other instruments are coming from,” while another compares the band to KT Tunstall, who also apparently plays along with pre-recorded elements. What’s interesting is that the song’s lyrics are about the transcendence of listening to an awesome DJ, “blowing our minds” with his pre-recorded music.

Other rock bands I’ve seen use significant taped material include Blonde Redhead, whose momentous, multi-layered soundscapes probably couldn’t be recreated live by a trio, and The Flaming Lips, who synched a whole show up to a giant video projection, and played along with “Bohemian Rhapsody.” On the other side are electronic artists like Daft Punk, whose performances seem to incorporate the actual mystery of what (if anything) is live at all, or the very meaning of “live performance,” into the experience of the show. Kraftwerk famously opens the curtains on their encore to reveal robots in their places, the entire band having been usurped by machines. It’s as if there’s a continuum of “live,” from most to least technology between us and the performers:

Perhaps it’s all about expectations. We know Daft Punk “live” will be all about the light show, but we expect our scrappy guitar rock duos to show us their chops free of taped accompaniment. But s it unfair to approach performance with a set of expectations, rather than just enjoy it as it is? Okay, Riffers, if you’re out there: when is a live show not a live show, and does it even matter if you’re having a good time?