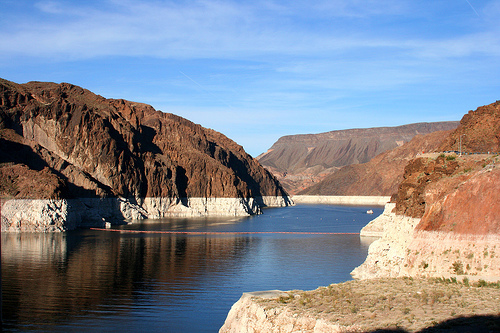 Climate change is already affecting US agriculture, water resources, land resources, and biodiversity, and will continue to do so. This based on a new report—the synthesis of 13 federal research agencies and 38 authors from a variety of universities, national laboratories, non-governmental organizations, and federal services. That fact that so many government agencies are involved in this study—released by the US Department of Agriculture—is as much the news as the study itself. New Scientist quotes ecologist and author Anthony Janetos of the Joint Global Change Research Institute in College Park, Maryland: “The fact is, we’re seeing lots of effects and impacts right now. These effects appear to be happening faster than expected, and the magnitude is bigger than expected. That’s a surprise.”

For example, climate change has already brought forward the start of spring growing seasons by as much as two weeks, and similar changes have occurred in the timing of bird migrations. Warmer conditions have also resulted in many plants and animals extending their geographic range further northward and higher up mountains. As climate change alters precipitation patterns, much of the eastern US has already become moister, while the west has become more arid. This means less winter snowpack in western mountains, and thus less snowmelt to keep rivers running cold and full in summertime. The higher stream temperatures are likely to put added stress on aquatic ecosystems.

You can access the final report in its entirety here. The highlights:

• Grain and oilseed crops will mature more rapidly, but increasing temperatures will increase the risk of crop failures, particularly if precipitation decreases or becomes more variable.

• Forests in the interior West, the Southwest, and Alaska are already being affected by climate change with increases in the size and frequency of forest fires, insect outbreaks and tree mortality. These changes are expected to continue.

• Much of the United States has experienced higher precipitation and streamflow, with decreased drought severity and duration, over the 20th century. The West and Southwest, however, are notable exceptions, and increased drought conditions have occurred in these regions.

• There is a trend toward reduced mountain snowpack and earlier spring snowmelt runoff in the Western United States.

• Horticultural crops (such as tomatos, onions, and fruit) are more sensitive to climate change than grains and oilseed crops.

• Young forests on fertile soils will achieve higher productivity from elevated atmospheric CO2 concentrations. Nitrogen deposition and warmer temperatures will increase productivity in other types of forests where water is available.

• Invasion by exotic grass species into arid lands will result from climate change, causing an increased fire frequency. Rivers and riparian systems in arid lands will be negatively impacted.

• A continuation of the trend toward increased water use efficiency could help mitigate the impacts of climate change on water resources.

• The growing season has increased by 10 to 14 days over the last 19 years across the temperate latitudes. Species’ distributions have also shifted.

• The rapid rates of warming in the Arctic observed in recent decades, and projected for at least the next century, are dramatically reducing the snow and ice covers that provide denning and foraging habitat for polar bears.