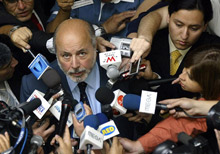 Now retired Chilean judge Juan Guzman conducts a long, tedious investigation into the brutal killings and disappearances that took place during the country’s Pinochet regime in The Judge and the General, an 84-minute documentary film that had its world premier recently at the San Francisco International Film Festival.

The film is Guzman’s journey toward discovery; of the atrocities linked to Pinochet, and to his own self-awareness as a judge in search of truth who initially was skeptical about taking on the investigation. Guzman and his crew of lab technicians, police, and government officials travel to all corners of the country to study bones of those who were killed, interview their surviving family members, and review piles of documents.

One audience member at the San Francisco screening, during an open-mic Q&A, told Guzman he was a “fraud” and that he should be ashamed of himself for taking credit for taking down Pinochet. After the loud “Boos” and hisses (and one or two claps) died down, Guzman said, “You obviously don’t know what you are talking about,” and applause filled the room.

It’s easy to get a little lost in the film’s details (or lack thereof) at times, and while the film seems thorough it occasionally loses steam. A living testimony to Guzman’s story and Pinochet’s legacy is the country’s current president, Michelle Bachelet—on Time Magazine’s top 100 people this year—who survived imprisonment with her mother under the Pinochet regime, but only after her father was killed under it.

The Judge and the General airs nationally on the PBS series POV late this summer.