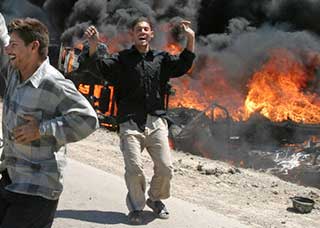 
Editor’s Note: In the latest issue of Mother Jones, Daphne Eviatar explored KBR’s attempts to use the so-called “political question doctrine”—a legal precedent allowing a court to decline ruling on matters it believes should be sussed out by other branches of government—to immunize itself from lawsuits brought by former employees who survived a deadly 2004 ambush in Iraq (and the family members of those who didn’t). While in 2006 the company succeeded in convincing a federal court that its activities in Iraq were effectively above the law, an appeals court overturned that decision on May 28, paving the way for the lawsuits to proceed.

On April 9, 2004, Edward Sanchez and a group of kbr truck drivers were milling around Camp Anaconda, near the Iraqi city of Balad, waiting for the go-ahead for their convoy to move out. The truckers had been told that morning that the roads outside the base were Code Red—off-limits. What they hadn’t heard is that earlier that day at least six other kbr convoys had been attacked by insurgents. So when the company’s security officials announced hours later that the road was open, Sanchez climbed into his unarmored, camouflaged vehicle and joined the line of idling trucks waiting to head outside the wire.

About an hour and a half into the trip, Sanchez saw kbr tractor trailers in flames along the side of the road, then heard drivers screaming over their radios. “Bill Bradley yelled for help twice,” Sanchez, a 39-year-old rancher from New Mexico, recalls. “That was the last I ever heard from him.” In what became known as the Good Friday Massacre, Bradley and 5 other American drivers were killed and 14 were wounded; 1 is still missing and presumed dead.

The military’s heavy reliance on contractors in Iraq has led to significant civilian casualties: more than 1,000 contractors have been killed and another 13,000 have been wounded since the war began. With their employees in harm’s way, kbr and other contractors have sought ways to immunize themselves from liability, as Sanchez and nine others who survived the attack—and relatives of those who didn’t—discovered in 2005, when they sued kbr and its former parent company, Halliburton, for wrongful death and fraud. The plaintiffs have gathered compelling evidence that the companies had reason to believe the convoy would come under siege but dispatched it anyway. But kbr has fought back with a controversial defense. Invoking the so-called “political question doctrine,” which allows the court to avoid deciding questions it believes should be left to other branches of government, kbr‘s lawyers have successfully argued that judging the contractor would require the court to judge the U.S. military, which is beyond the scope of its authority.

The survivors say they simply want a court to determine whether kbr violated a basic commitment to protect its employees. “When I saw some of the evidence in black and white,” says Ray Stannard, a 49-year-old former Marine from El Paso who was driving for kbr that day, “that’s when I knew—these people are murderers.” Stannard, who injured his leg and broke his arm during the hours-long attack, says he has seen emails sent among kbr‘s top brass revealing that supervisors knew they were sending the men into an area under insurgent assault. Those emails, like much of the evidence in this case, have been filed under seal at kbr‘s insistence. But deposition testimony from former kbr security personnel, which is public record, confirms the company was warned repeatedly of the danger.

A lawyer for the company argues that what kbr‘s security team knew on the day of the attack is irrelevant. “The military decides everything and is responsible for everything”—including providing security for kbr convoys—says David Kasanow, who is defending the company in this and similar cases. So for a court to weigh kbr‘s actions, it would also have to take the military’s into account.

In September 2006, Judge Gray H. Miller, a recent Bush appointee to the federal court in Houston, agreed. There is no way, he wrote, to “try a case set on a battlefield during wartime without an impermissible intrusion into powers expressly granted to the Executive by the Constitution.” In late January, kbr‘s lawyers echoed that argument to a federal appeals court in a session that was closed to the public at kbr‘s request.

As Mother Jones went to press, the appeals court had yet to render a verdict, but if it upholds Miller’s ruling, the implications are vast. If kbr isn’t subject to American law, then neither is any other contractor working alongside U.S. troops. “Simply because an act took place in a contingency operation doesn’t mean the court can’t decide a claim,” says Laura Dickinson, a University of Connecticut law professor and expert on government contracting law. “That alone shouldn’t be the basis for assertion of the political question doctrine.”

Yet at least three similar cases filed against kbr, all claiming the company failed to protect its employees, have been dismissed on the same grounds. Most recently, several women who worked for kbr in Iraq claimed they were sexually assaulted by coworkers. In each case, kbr argued successfully that the court lacks jurisdiction either because the women’s employment contracts, signed with a Cayman Islands-based subsidiary of kbr, require disputes to be decided in private arbitration or because, as a military contractor operating overseas, the company is immune from civil legal liability.

Congress is considering legislation to allow for prosecution of private security guards who’ve gunned down Iraqi civilians. But the question of how private military companies treat the unarmed workers they send into the line of fire—or why these workers have no legal recourse—isn’t part of the discussion.

“What amazes me about this process,” says Scott Allen, a Houston lawyer representing the surviving kbr drivers, “is that I thought one of the reasons we went to war over there was to establish a democracy. If this were going on in Iraq, this would be used as an example of how there’s no democracy. I thought that’s what we were fighting for.”