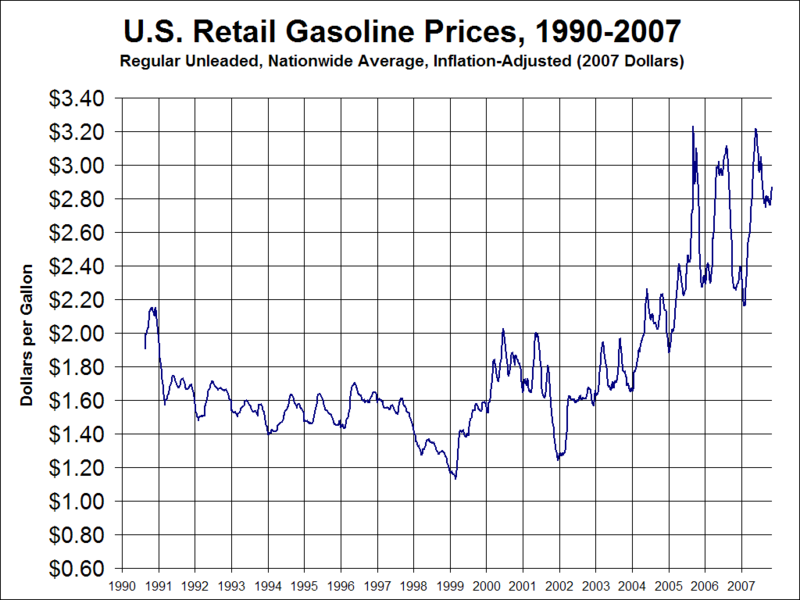 Gas prices are rising and this could be great news. Even though it seems lousy in the short run. The truth is higher gas prices are already forcing people to drive less, skip trips, rethink vacations, and reject SUVs—part of a whole host of behavioral changes that add up to rare good news for our endangered atmosphere. LiveScience blogger Robert Roy Britt writes that some people are already slowing down on the roads as a means to save gas, as are some airlines. Higher gas prices are also saving human lives. Two thousand fewer people will die road deaths and 600 fewer will die from air pollution. One economist calculates that each $1 rise in gas equals 14 percent less fuel consumption over the long haul.

However, higher gas prices simultaneously feed biofuel fever. Why use oil when you can use corn? But biofuel is also associated with steeply rising food costs. The dilemma is that you and me can drive 1,000 miles or we can feed a person for a year, and people around the world are getting hungrier, writes Stan Cox on AlterNet. Our gas guzzling ways are about to drive the state of Iowa, the epicenter of agriculture, to import corn. How’s that for weird? Apparently it’s so weird that the politicos are scrambling to plow under last year’s crop of legislature as fast as they can, writes Cox:

Now 24 Republican members of Congress, citing high food prices, have come out into the open to urge a retreat from the Energy Independence and Security Act of 2007, which mandates rapid increases in biofuel production… Gov. Rick Perry of Texas has formally requested that the federal government relax biofuel requirements imposed on his state… The Missouri legislature is considering a rollback of its own recently passed law requiring that gasoline must be mixed with a minimum percentage of ethanol.

Furthermore, Cox does the interesting math on energy consumption between transportation vehicles and a human belly, and it’s not a fair fight:

The energy contained in the gasoline that fills a typical SUV’s tank contains approximately the same number of calories as are required in the annual diet of one adult. Or, rather than picking on SUVs, consider the energy burned by a Prius hybrid on a trip from San Francisco to San Diego and back. That would also feed a person for a year. Measured in energy units like kilocalories, world demand for liquid fuels (gasoline, jet fuel, diesel and now biofuels) is currently more than six times the global demand for food. In energy terms, fuel demand will shoot up three times as fast as food demand between now and 2030.

The foreign-oil-versus-biofuel heavyweight match is only sucker-punching the real issue: the need to use less fuel, whatever it’s source, and pronto.