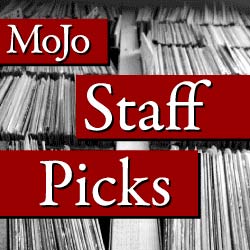 Welcome back to the “staff picks” shelf at The Riff. Fresh off production of our July/August issue, we’re happy to be playing some music.

1. You’ve heard it before, but not like this. “Cotton Eyed Joe” in its true Appalachian splendor—one fiddle, one voice. A New Yorker by origin, Bruce Molsky travels deep in the backwoods of America collecting tunes and learning technique from porch-sittin’ old-timers. An immaculate musician, in this track, Molsky nails the true scratchin’ style of old-timey music—complete with quarter tones and double stops, he fiddles and sings at the same time.

2. Has the Democratic race been divisive? Is it threatening to tear apart the party? My grandfather thinks so, and it’s certainly a lively topic in political America these days. So I thought I’d add a little music to the discussion by one of my favorite new LA bands, Division Day. Next time you’re caught in an argument between BHO and HRC, you may just find yourself hoping the damage is “Reversible.” (Click here to listen to the full song played to a picture of the band.)

3. I was first introduced to Oliver Rajamani a couple years back while working in the south Indian state of Tamil Nadu. I was immediately intrigued by his seemingly effortless success in blending diametrically different musical traditions. His songs, like “Unnai Marenthal,” are mostly sung in Tamil, an ancient Dravidian language, but are mixed with Hindi, Urdu and Spanish. His music similarly pulls motifs from various cultures—Brazilian rhythms, flamenco guitar, Indian drums, and gypsy spice. Makes for daringly good party music.

4. I’m not the first to point out that when under incredible pressure, consumed by guilt, or facing impending doom, we humans tend to exhibit a curious response—the nervous tic. The calmly capable Andrew Bird, master of live-looping, has noticed as well. If you ever find yourself with a slight “Nervous Tic Motion of the Head to the Left,” you may want to tune in, strap on the sumo suit, and relieve some stress.

Encore. She told me, to my face, there’s a good man’s in my place. This is the crux of “Fare Thee Well Blues,” as played by Big Apple old-timer Bruce Molsky (because I know you wanted more). This is a satisfying blend of grit and talent with enough blue notes to catch the attention of even the mildest blues fan. The song is derived from a 1920’s rendition by Mississippi bluesman Joe Callicott, which Molsky found on an LP in the back of a record store as a teenager.