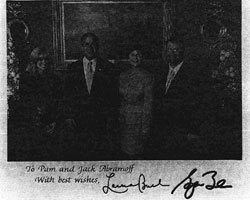 Despite administration denials, superlobbyist-turned-felon Jack Abramoff did have political traction in the White House, according to a damning draft report released Monday by Rep. Henry Waxman’s (D-Calif.) House government oversight committee. Among the findings: Before he was disgraced, Abramoff provided gifts and meals to White House officials, met with President George W. Bush at least six times, and influenced a State Department dismissal and a presidential political endorsement.

While the draft report does not allege that Abramoff influenced any decision taken by President Bush himself, the latest revelations seem to confirm the conclusions of an earlier oversight committee report sketching out Abramoff’s influence in the White House. The first report, issued in September 2006, used billing records and emails from Abramoff’s firm as its main sources of information. White House spokeswoman Dana Perino subsequently attacked the first report for being based on “fraudulent” records, and then-White House spokesman Tony Snow claimed Abramoff “got nothing” from his efforts at 1600 Pennsylvania.

The latest findings strongly imply that Abramoff’s success was at least partially due to his use of what one administration official referred to as “fruit”: Gifts including meals and sports tickets. According to the White House documents and testimony, White House officials asked for or received tickets from Abramoff associates on 21 confirmed occasions. The report says:

Whether or not the “fruit” was actually part of a quid pro quo, the new findings make clear that Abramoff got results for his White House lobbying efforts. Perhaps Abramoff’s greatest success in lobbying White House officials was to force the dismissal of Alan Stayman, a State Department employee. Stayman was in charge of the federal government’s relationship with the Commonwealth of the Northern Mariana Islands, a major Abramoff client. Stayman had taken actions in a previous government job that displeased the CNMI government. The CNMI, and, by extension, Abramoff, wanted him gone. According to the committee’s 2006 report:

Stayman was an official in the Department of the Interior’s Office of Insular Affairs during the 1990s who advocated labor reforms for the Commonwealth of the Northern Mariana Islands that Abramoff opposed on behalf of his client, which was the Commonwealth.

The committee’s latest report corroborates the 2006 report’s information about the firing of Alan Stayman. Three pieces of evidence highlighted in the new report indicate that Stayman’s firing was politically motivated (i.e., came from the White House). The first is a deposition by Monica Kladakis, then-Deputy Associate Director in the White House Office of Presidential Personnel (OPP), in which Kladakis confirmed, according to the report, that “OPP became involved in Mr. Stayman’s removal after White House officials were contacted by Mr. Abramoff’s team.” The second piece of evidence is a July 2001 e-mail in which Stuart Holiday, then-Associate Director of OPP, says: “We pulled the plug on [Stayman].” Finally, according to the report, “in the internal White House communications about Mr. Stayman’s case, White House officials repeatedly noted they would be giving status reports to Abramoff lobbyists.” The new evidence corroborates the information from Abramoff’s firm’s records, which include a report by an Abramoff associate that then-White House political director had promised to get Stayman “fired.”

The White House documents highlighted in the new report seem to indicate that, like the fired U.S. attorneys, Stayman was dismissed despite good reviews from his superiors and general support in the State Department for extending his tenure. A 2001 memo from James Kelly, the Assistant Secretary for the Bureau of East Asia and Pacific Affairs, asked that Stayman remain in his position “until at least November 4, 2003.” And Kladakis testified that Kelly had been “very upset at the idea of us having Stayman leave.”

The White House documents in the new report also provide evidence that the White House sought Abramoff’s input when making decisions about political appointments to the Office of Insular Affairs (OIA), which, according to its website, “has administrative responsibility for coordinating federal policy” in the Pacific island territories where Abramoff had clients. In one example, Matthew Schlapp, the Director of the White House Office of Public Affairs from 2003 to 2005, asked a White House staffer to send an Abramoff associate the resume of a candidate for a position at OIA. The same day, Schlapp sent then-Karl Rove assistant (and former Jack Abramoff assistant) Susan Ralston an email. In the email, Schlapp told Ralston that he had asked the Abramoff associate to “check out” the candidate for the OIA position. As it turned out, Mr. Abramoff opposed the candidate, who did not receive the appointment.

In addition to orchestrating Stayman’s removal and influencing OIA personnel decisions, Abramoff got the White House to agree to refrain from endorsing the Republican candidate in CNMI gubernatorial election. (Abramoff supported a third-party candidate). According to the 2006 report, Abramoff’s efforts prompted Ralston, Karl Rove’s assistant, to email Abramoff, writing, “You win :). KR said no endorsement.”

Mr. Mehlman forwarded the [Abramoff associate’s] request to Leonard Rodriguez, who worked under Mr. Mehlman in the Office of Political Affairs, instructing, “Please advise on whether to do this or not, reaching out to the relevant people at the RNC.” Mr. Schlapp forwarded the background [on the candidate] to Mr. Rodriguez. Mr. Rodriguez then followed up with the RNC, was told that the RNC’s Western Regional Political Director “strongly recommends that [the candidate] receive an endorsement from President Bush,” and forwarded this information to Mr. Mehlman and Mr. Schlapp.

Needless to say, the recommendation of the RNC’s Western Regional Political Director was ignored: No endorsement came. Despite administration officials’ denials, it seems that in the Bush White House, Jack Abramoff and his clients had more pull than the President’s own party.

(Mother Jones has covered Jack Abramoff extensively in the past. For background on Abramoff’s life story, see Barry Yeoman’s story from the September/October 2005 issue, “The Fall of a True Believer.” More recently, in November 2006, Peter Stone explained how Abramoff created a network that funneled money all over D.C. And in April 2006, Steven Hill explained how far beyond Abramoff the problem actually goes.)