In anticipation of the general election, the McCain campaign just revamped its website to focus more specifically on his contest with Barack Obama. The front page now has four main tabs that visitors can use to access the rest of the site. They are, in this order: “Decision Center,” “General Election,” “Obama & Iraq,” and “Golf Gear.” 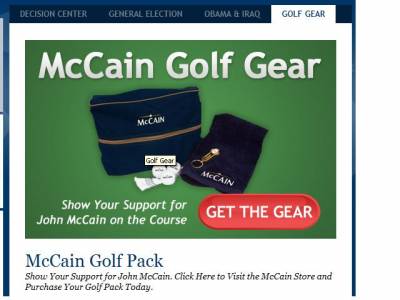 It’s no surprise that John McCain wants you to donate money, and of course he wants you to know what he thinks of his opponent. But what he wants just as much is for you to head out to the green with your buddies, McCain golf pack in tow.

The disdain you may notice in my voice is not because the maverick is trying to sell us something—in the modern campaign, every candidate needs merchandise. It’s that he’s pushing golf, the classic sport of the leisure class. Even George Bush, historically oblivious to the pain of the common man, claimed recently to have given up golf because he couldn’t bear the irony of trying to perfect his swing while troops died in Iraq. “I don’t want some mom whose son may have recently died to see the Commander-in-Chief playing golf,” he said recently in an interview with Politico. “I think playing golf during a war just sends the wrong signal.” McCain apparently didn’t get the memo…perhaps he was out golfing?