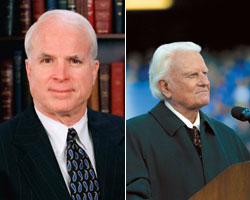 Conservative news outlet Newsmax is reporting that its attempts to facilitate a meeting between John McCain and longtime pastor-to-the-presidents Billy Graham have been rebuffed by the McCain campaign.

In recent weeks I have been involved with Brian Jacobs, a Fort Worth, Texas, minister and consultant to the Billy Graham Association, to broker a meeting between McCain and Graham. In May, we contacted the McCain campaign with an offer to arrange such a meeting, as we had done between candidate George W. Bush and Graham during the 2000 election.

In response to their overtures, McCain’s director of scheduling sent Wead and Jacobs an emailing saying, “Senator McCain appreciates your invitation and the valuable opportunity it represents. Unfortunately, I must pass along our regrets and do not foresee an opportunity to add this event to the calendar.”

The hesitance on the part of the McCain campaign may be because of McCain’s past experiences with pastor’s this campaign season: he’s had to dump endorsements from John Hagee and Rod Parsley after controversial statements from both men made it politically impossible for McCain to stay associated with them. (Caveat: there may be no hesitance at all; Newsmax may have gotten this story wrong.)

Billy Graham isn’t Hagee or Parsley. He has had a relationship with every president since Eisenhower, Republicans and Democrats alike. He has been thoroughly and completely vetted; no one would blame McCain for meeting with him. The campaign’s reported decision to avoid Graham may be part of a novel strategy for a modern Republican presidential candidate, one that jettisons the Religious Right in favor of moderates. It’s already being manifested in ways that are leaving prominent Christian leaders wary. “For John McCain to be competitive, he has to connect with the base to the point that they’re intense enough that they’re contagious,” Tony Perkins, president of the Family Research Council, told the New York Times. “Right now they’re not even coughing.”

The rejection of an offer to meet with Graham is yet another indication that the McCain campaign has made a deliberate, strategic decision to chart a new course for the GOP, a course without the sizeable evangelical Christian voting bloc serving as its base.

The new course is likely designed to pick up disaffected Democrats, even Sen. Hillary Clinton’s women supporters, who are pro-choice.

The danger for McCain is in his campaign’s failure to grasp the size of the born again vote. Latest surveys show that fully 42 percent of all Americans claim to be “born again.”

But the risk is not just that the Republican nominee will lose evangelical voters but that he will lose its massive infrastructure: megachurches with their schools, television programs and massive mailing lists which traditionally play a crucial role for Republicans in voter registration and voter turnout. The cost to the party of replicating this role themselves would be incalculable….

The theory behind the McCain campaign’s strategy to ignore evangelicals is that they have nowhere else to go, that Obama is too liberal, and they”ll vote against him come November.

The wisdom of this decision remains to be seen. Obama, who has been courting evangelicals and recently hired a full-time staffer to do evangelical outreach, may have the strongest appeal to (former) members of the Religious Right of any Democratic politician since Jimmy Carter. And if moderates buy the Democrats’ contention that McCain is running for a third Bush term, McCain’s gamble may leave him with no one in his corner.

Update: I’ve spoken with Billy Graham’s publicists and they have no idea what is going on. They promised to call me back when they had answers.