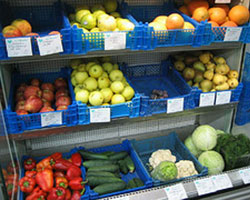 Last week, new consumer price data released by the US Labor Department confirmed what most shoppers already suspected: Food prices, which took their biggest one-month leap in nearly two decades in April, rose even further in May. Energy costs, too, went up last month. The big question, though, is why?

At the financial leaders G8 summit that wrapped up over the weekend, food and oil speculation were front and center.And G8 leaders aren’t the only ones expressing concern over traders profiting from the world’s pain.
Major hedge-fund stars like George Soros and Michael Masters are also screaming moral foul on commodity speculation—a clear signal there’s more fire than smoke on the horizon.

As Masters told a Senate committee last month, “Institutional investors have purchased over 2 billion bushels of corn futures in the last five years. [They] have stockpiled enough corn futures to potentially fuel the entire United States ethanol industry at full capacity for a year.”

Indeed, the current agricultural price bubble has produced record highs in soybeans and wheat as well. Against this backdrop, a clueless Congress passed US farmer and food-stamp aid within the recent farm bill, without addressing the possibility that speculation could be to blame, or that curtailing speculation could help alleviate the domestic and global food crisis. They should have looked toWall Street’s lead.

The latest grain and oilseed trading report from the Chicago Mercantile Exchange cited first quarter of 2008 trading volume up 32 percent over the last quarter of 2007. That’s extra money coming in from speculators, not corn or wheat farmers hedging their crop prices in case of bad weather.

Last week, a group of senators led by Carl Levin (D-Mich.) introduced the Close the London Loophole Act, which would curtail a situation that allows speculators to bypass all Commodity Futures Trading Commission regulations by trading on foreign exchanges.

But without strong regulation of electronic exchanges and the derivatives products that enable speculators to move huge proportions of the futures markets underlying commodities, putting a bit of regulation into the London-based exchanges will not alleviate anything. Unless that’s addressed, this bubble is going to take more than homes with it. It’s going to take lives.