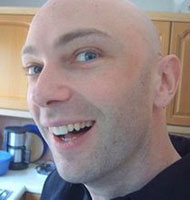 By the time the feds caught up with former stockbroker Shaun Attwood in 2002, the big-eared Brit hardly seemed like the drug kingpin they were after. He was living in a cramped apartment in Scottsdale, Arizona, with his fiancé, Claudia. He spent most days trading stocks online from his home office and hitting the gym. “English Shaun,” as Attwood was known in law enforcement circles, was supposed to be the mastermind of Phoenix’s largest drug syndicate, dubbed The Evil Empire; it single-handedly sustained Phoenix’s booming rave scene. Homebody or not, a wire picked up Attwood discussing shipments of ecstasy, methamphetamines, LSD, marijuana, and cocaine. Then the DEA knocked his door in.

For the next five and a half years Shaun Attwood inhabited Sheriff Joe Arpaio’s notorious jail and the sweltering prisons of central Arizona. Like many prisoners, he broke out in bedsores and hives, made friends with transsexuals, and evaded the wrath of the Aryan Brotherhood. But while he did time in maximum security under the self-proclaimed “toughest sheriff” in America, Attwood also did something most prisoners can’t; he took his father’s suggestion and started blogging covertly about his daily life.
At first, Attwood’s aunt was the blog smuggler. When she visited him at the Madison Street Jail, he handed her a scrap of paper tucked into a stack of legal documents—his first blog post. Once home, she transcribed the post and emailed it to Attwood’s father, Derick, in England. A few days later, Derick activated “Jon’s Jail Journal” on Blogspot. There he posted his son’s first blog entry from prison. Its title: “Deep Shit.” It began:

We have had no running water for three days. The toilets in our cells are full of faeces and urine. On the second day of the water outage I knew we were in trouble when the mound in our steel throne peaked above sea level.

The temperature outside is currently 114 degrees. The trickle of air into our cell’s feels like hot air blowing from a hair-dryer. We are soaked in sweat all day and night…Between the sweat trickling down my body and the cockroaches tickling my limbs, it is impossible to sleep properly. Last night, while sleeping on my side, my ear filled up with sweat, and when I moved my head, the sweat poured out onto my face. I woke up, startled. It felt like someone was touching my cheek.

Soon enough, the Guardian excerpted Jon’s Jail Journal. Shortly after that, the BBC did a story on Attwood. Suddenly the blog was getting 10,000 hits a month.
In time, “Jon’s Jail Journal” became more than just a way for Attwood to vent about prison conditions. Derick put up a wish list for Attwood on Amazon.com. Soon, strangers were sending Attwood hundreds of books. “It got to the point that so many books were coming in that we had to take the Amazon wish list down,” says Derick. In turn, Attwood donated them to the prison library. “I had never really read fiction,” Attwood says. That changed. “I had a John Updike phase, a Brett Easton Ellis phase. I read all of Murakami, all of Vonnegut, all of Tom Wolfe.”

Shortly before his release, he read a biography of Aleksandr Isayevich Solzhenitsyn, a Russian novelist imprisoned for eight years for criticizing Stalin. Solzhenitsyn chronicled life in the grim labor camps of Kazakhstan. His writings exposed the Gulag, and in 1970 he was awarded the Nobel Prize for Literature. Attwood, sweating in Arizona, took heart:

I have just finished reading a Solzhenitsyn bio that I started two days ago and couldn’t put down. It’s as if fate has stepped in just before my release and strengthened my commitment to making a go of writing.
My suffering can’t compare with what Solzhenitsyn had to endure, yet he rose from prison to spearhead the literary elite of Russia. Death called on him so many times: on the front fighting the Nazis, in Russian prisons, and then in the form of cancer. Reading about the odds he overcome has inspired me.

Attwood’s most meaningful relationships, however, were ultimately not with books, but with his fellow inmates. This, too, was reflected in Jon’s Jail Journal. Regular readers of the blog came to know a dubious cast of characters that included Xena, a 6’5″ she-male, Two Tonys, an Irish-Italian murderer serving multiple life sentences, and Frankie, an alleged Mexican mafia contract killer. He writes:

Frankie…is the source of most of the hullabaloo in our pod. He is a recent arrival from the jail’s infirmary. Last month Frankie was calmly playing cards in a maximum security pod, when an 8 inch shank was suddenly plunged into the back of his neck. Unfazed, he extracted the shank, and was about to return the gesture, when newly arriving guards pepper-sprayed him, causing temporary blindness. The ‘hit on the hitman’ had failed, and Frankie was dragged from the pod, in front of amazed onlookers with blood spurting from the wound. He was consequently promoted to our pod—a super maximum area, where inmates are confined to tiny 2 man cells for 23 hours every day.

“Sometimes,” he says, “I feel I’m in a Kafka novel.”
In recent years, other prisoners have used written correspondence to post profiles on MySpace. But Jon’s Jail Journal is one of the few verifiable prison blogs online, and by far the most popular. Jon’s Jail Journal has attracted nearly 500,000 readers in the last three years.

Many readers comment on the blog posts, and Attwood’s father says his email address book now has more than 4,000 entries from people who have contacted his son. These relationships, Attwood says, have helped him feel connected to life beyond the prison walls. “People write to me from Singapore to New Zealand, the Netherlands, China, Siberia,” he says. “I write to up to 50 people a month, and all of those people have come about as a result of the blog. They can see that I’ve transformed the negative into the positive.”
After nearly 3,000 days and hundreds of blog posts, Attwood was released last year.

He’s still writing, and his literary ambitions don’t end with his blog. But until someone picks up his book, he posts notes from bloggers still behind bars. Like this one:

Anything new with you? My friend, you need to get yourself a job and leave that computer alone…Much love and respect, Mr. Frankie
P/S
My trial starts August 19-2008