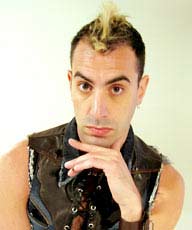 Sacha Baron Cohen is stepping things up in preparation for Brüno, the actor and comedian’s followup to the $260 million-grossing Borat. As we’ve covered here before, the Brüno character’s gay antics were hilarious on Da Ali G Show and apparently deeply disturbing to Wichita airport patrons more recently. But his latest prank has made headlines: former Mossad agent and political analyst Yossi Alpher has revealed that he and a Palestinian were duped by Brüno during an interview in Jerusalem two weeks ago. Highlights include a question confusing Hamas with hummus, a comparison of the Israeli-Palestinian conflict to the, er, Jennifer-Angelina conflict, and a good-hearted attempt to help unite “Jews and Hindus.” Those first two are kind of iffy, chuckle-wise, but that last one totally kills me for some reason. Alpher wrote about the experience in a column for The Forward, and he insists that he knew something didn’t smell right (the Jerusalem post actually said, “something wasn’t kosher,” but I just couldn’t repeat that) throughout the interview, but stuck with it, clinging to the belief that Cohen’s character was the “German rock star” producers had claimed him to be.

One can’t help but wonder what one would do in such a situation. Of course we’d like to think we’d see right through it, but as Stanley Milgram’s social psychology experiments back in the ’60s proved, we do what we’re told. Or, perhaps more optimistically, we try to be nice, even when faced with a lunatic with a crazy hairstyle who thinks our political conflicts are about chickpea paste. Either way, the Brüno movie is due out next spring.