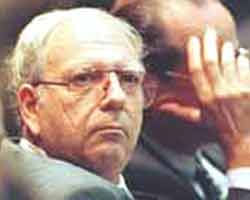 
At first glance, Efraim Halevy seems an unlikely champion of the virtues of engaging terrorists. The former chief of the Mossad, perhaps the world’s most paranoia-inducing intelligence service, Halevy helped negotiate Israel’s historic 1994 peace treaty with Jordan, but also had a role in developing his country’s policy of targeted assassinations of terrorist leaders. Reserved, with some of the British formality of his youth—his family immigrated to Israel when he was a boy—Halevy, 73, brings to mind John LeCarré’s George Smiley. And a tweedy, unapologetically hawkish ex-spymaster may just be the only advocate capable of legitimizing a notion effectively ostracized in US politics: talking to the Palestinian militant group Hamas.

“From my point of view, Hamas is a deadly enemy,” Halevy told me in April. “So, with a deadly enemy, you can deal three ways: either destroy them, or cull them into submission, or simply wait for a better day. I think the way things are at the moment, there is a situation arising where Hamas is beginning to consider what its options are—and this is an opportunity.”

It’s a message Halevy has recently been taking to Washington, where the Bush administration maintains a fiercely ideological prohibition against talking to “bad guys”—unhelpfully lumping, Halevy and other critics note, militant groups, terrorists, and hostile regimes into the same amorphous category. In fact, Halevy has pointed out, Hamas is “not solely a terrorist group,” but a political one as well; it has aspirations “to be part of the system and not, as Al Qaeda aspires, to destroy it.”

“Hamas is not Al Qaeda, and indeed Al Qaeda has condemned them time and time again,” Halevy said. “Hamas may from time to time have tactical, temporary contact with Al Qaeda, but in essence they are deadly adversaries. A serious effort to dialogue indirectly with [Hamas] could ultimately drive a wedge between them.”

Beyond Halevy, Israeli hawks arguing in favor of engagement include former Shin Bet chief Yaakov Perry, who along with three other former top Israeli security officials urged the government to pursue peace with the Palestinians in 2003. (“We should talk with Hamas on issues that are hurting Israel,” Perry told me. “Not negotiations, but talks.”) Former top diplomat and Mossad official David Kimche has traveled to Washington to suggest that the administration pursue engagement with Syria, and former Israeli foreign minister Shlomo Ben-Ami visited DC in March to promote talks with Israel’s adversaries. “We need you to do diplomacy, because the military option does not work,” Ben-Ami said at a private dinner. “We need a benign superpower who is able to engage.”

There was a palpable urgency to his words, and for good reason. “Look, I am a Zionist,” Kimche told me when we met in a Tel Aviv shopping mall. “I believe very strongly we need to have a state here. And I believe strongly that the only way to thrive is by reaching peaceful relations with our neighbors and reaching a two-state solution. If we have one state for two peoples, it will be our doom. It will have to become an apartheid state, an anti-democratic state.”

Such pragmatism puts Israel’s “right-wing realists,” as one American Middle East hand refers to Halevy, at odds with Washington’s armchair hawks—who’ve attacked as “anti-Israeli activism” the mere suggestion that the current policy is not working. “My approach to Hamas is not an ideological one,” Halevy says pointedly, noting that just as some Israelis, in the face of the realities of life on the front lines, have grown impatient with their administration’s dogma, so too have American officials in Iraq grown more flexible than their bosses back in Washington.

“In Iraq, our commanders and diplomats have stopped thinking in terms of black and white,” agrees Colin Kahl, a former Pentagon Iraq consultant who now teaches at Georgetown University. “Hard realities have forced them to embrace different shades of gray. There are no good guys and bad guys in this equation, just people it is possible to cut deals with and people it is not possible to cut deals with.”

Given that, Halevy asks, “If they can be pragmatic in Iraq, why are they ideological in Palestine?”