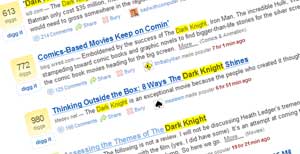 Digg.com, the web site that allows users to vote on links and stories, is a good place to see what people are talking about (and interested in reading about). Right now, it’s all Batman: The Dark Knight, which opened over the weekend to record-breaking crowds. Apparently it’s pretty good (this reporter finally managed to buy tickets to an Imax showing tomorrow), enough so that Batman-related stories seem to be taking up a majority of Digg’s space, and amidst the box office figures are some pretty ridiculous headlines. I know you’re desperate for some Dark Knight-inspired click-throughs, bloggers, but jeez. Here are ten of the more, shall we say, esoteric headlines currently getting votes on Digg:

10. The Real Gotham Revealed (from io9.com)
So, wait, you took some pictures of Chicago?

9. Holy Bat Bouts: Batman vs. Batman vs. Batman (from latimes.com)
Not the video mashup you might have hoped for, this is just a list of categories in which the different Batman films are judged. This story also gets the award for Best Digg Comment: “I like Batman. How could you not like Batman?” How many times can we say the word Batman?!

8. The 10 Most Ridiculous Weapons in Batman’s Arsenal (via, er, toplessrobot.com)
Okay, at least they’re kind of acknowledging the ridiculousness of the enterprise. Runner-up for Best Digg Comment: “Nothing beats bat nipples.”

7. 10 Batman Villains Who Should Never Be On Film (via filmschoolrejects.com)
Since filmmakers seem to be happy with The Joker, I don’t think we really need to worry about Kite Man popping up now, do we?

6. Top 5 Super Hero Day Jobs (via thedeadbolt.com)
Is “blogger” one of them?

5. The First Negative Review of The Dark Knight (via slashfilm.com)
Oh. My. God. You mean to tell me that there’s a blogger out there courageous enough to take on the evil warlords of the film-review corporations whose positive reviews were clearly the result of a conspiracy? Give that dude a Digg!

3. The 10 Manliest Superheroes (via bamkapow.com)
Not in a gay way.

2. Heath Ledger: The Late Actor Talks About ‘Dark Knight’ (via filmonline.com)
We’re so desperate for pageviews, we actually figured out how to communicate with the deceased.

1. Give Ledger an Oscar If He Deserves It, Not b/c He Is Dead (always watching.org)
But, how will we be able to tell?