Hurricane Gustav is threatening the residents of New Orleans and the Gulf coast. It is also threatening the Republican convention in St. Paul, where John McCain will be nominated this week. Or is it helping McCain?

On Sunday afternoon, President Bush announced that due to the hurricane he would skip the GOP convention, where he and Dick Cheney were scheduled to speak on Monday night, and the McCain campaign said it would cancel most of the convention program for that day. (Cheney, too, is taking a pass on St. Paul.) Instead, Bush will head to Houston to be near hurricane rescue efforts. As if his presence there is going to matter. Bush is wisely not going to New Orleans, for a presidential visit there would surely disrupt rescue operations.

But is Bush’s absence from St. Paul a win or loss for McCain? Certainly, he could do hurricane-like damage to the McCain campaign if a split-screen television shot on Monday night showed Bush addressing the GOP delegates and Gustav slamming into New Orleans. Any junior image-manipulator would know that such a thing must be avoided at all costs. Even without a hurricane, Bush’s appearance at the McCain-fest in St. Paul could have been dicey. The Obama campaign is doing all it can to tie McCain to the most unpopular president in decades. No doubt, some of convention planners would have liked from the start to have a Bush-less program. But had they not invited the president, they would have created a major issue that would have dominated the convention. Now they can say, Thank God for the weather. And Bush has a good excuse for staying clear.

There is a cost. Hurricane Gustav is damn powerful reminder of Hurricane Katrina and the Bush administration’s abject failure. So whether Bush is at the convention or not, the ghost of Katrina will hover over the proceedings–even if the convention planners get their thousands of delegates to eschew the parties and do volunteer work to help Gustav victims. Moreover, Gustav may rob media time and attention from the GOP effort to define–that is, delegitimize–Barack Obama. Fewer hours of convention equals fewer hours of Obama-bashing. And if there is a crisis under way, a hyper-partisan attack might seem untoward.

Gustav ought to be also a reminder of McCain’s own failure to lead during the Katrina disaster. As Jonathan Stein noted in April (when McCain toured the hurricane-damaged areas of New Orleans):

But McCain’s record on Hurricane Katrina suggests that he was part of the problem, not the solution. McCain was on Face the Nation on August 28, 2005, as Katrina gathered in the Gulf Coast. He said nothing about it. One day later, when Katrina made landfall in Louisiana, McCain was on a tarmac at Luke Air Force Base in Arizona, greeting President Bush with a cake in celebration of McCain’s 69th birthday. Three days later, with the levees already breached and New Orleans filling with water, McCain’s office released a three-sentence statement urging Americans to support the victims of the hurricane.

Though McCain issued a statement the next week calling on Congress to make sacrifices in order to fund recovery efforts, he was quoted in The New Leader on September 1 cautioning against over-spending in support of Katrina’s victims. “We also have to be concerned about future generations of Americans,” he said. “We’re going to end up with the highest deficit, probably, in the history of this country.” 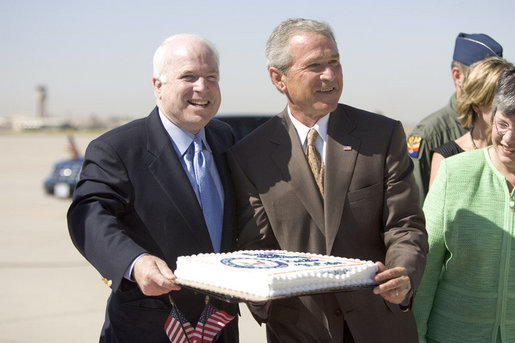 It’s a shot that ought to be circulated widely this week–whether or not Bush is in St. Paul.