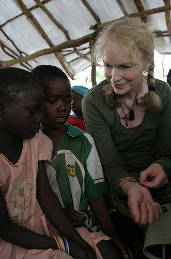 So, what do Mia Farrow and Erik Prince have in common? No, it’s not a joke. The answer is nothing. Well, almost nothing. But according to ABC News, the aging starlet and the Blackwater founder breakfasted together in New York City last month. The subject of their discussion? Sending Blackwater operators to Darfur to train African Union soldiers and protect refugee camps. Farrow, a UNICEF Goodwill Ambassador and chair of Dream for Darfur, is (like everyone else) frustrated by the inability of African peacekeepers to protect refugees from the Janjaweed and believes Blackwater just might have what it takes to do the job right. “Blackwater has a much better idea of what an effective peace-keeping mission would look like than western governments,” Farrow said.

Farrow has become an impassioned advocate for stopping the violence in Darfur at the same time that Blackwater, better known for its cowboy behavior in Iraq, appears to be attempting to reposition itself away from protecting diplomats and back to its original mission, the provision of military training. A reporter who knows both Prince and Farrow apparently put the odd couple in touch with each other by telephone, a contact that resulted in the New York breakfast.

More from ABC News after the break…

Farrow said she acknowledged that the idea of working with Blackwater was “controversial,” but said she was “curious about Blackwater’s ideas” about to how to help the situation.

Though Farrow said that it is unlikely that Sudanese President Omar al-Bashir would allow Blackwater into Darfur, she said the Darfur refugees are desperate and any help the company could provide would be welcome.

Prince, meanwhile, has reportedly said that with about 250 professionals, Blackwater could transform roughly one thousand of the African Union soldiers into an elite and highly mobile force.

“I’m so sick of hearing that nothing can be done,” Prince told the Wall Street Journal last month, calling the Janjaweed, a militia force backed by the Sudanese government, an “unfettered bully.”

“No one has stood up to them,” he told the Journal. “If they were met by a mobile quick reaction force of African Union soldiers, the Janjaweed would quickly learn their habits were not sustainable.”

Photo used under a Creative Commons license from hdptcar.