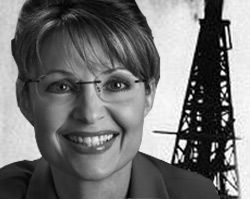 Long thought of as a remote wilderness separated from the rest of the United States in both distance and temperament, Alaska is now perched on the frontier of the 21st-century economy, ready to live up to its once overly sanguine state motto, “North to the Future.” But in Alaska, as it turns out, the future means more of the past: More fossil fuels extracted under the frozen tundra and ocean; more industrial development of pristine wilderness and more destruction of Native lands; and perhaps even another Cold War with Russia over who will control the Arctic’s crucial energy supplies. Poised to help propel Alaska into this future is its governor and now the Republican vice presidential candidate, Sarah Palin.

Alaska once boasted genuine political mavericks like Democratic senators Ernest Gruening and Mike Gravel, but they long ago gave way to right-wing Republican pork-barrelers with close ties to the oil and gas industry, like Sen. Ted Stevens and Congressman Don Young. Both championed the Alyeska Trans-Alaskan pipeline that connects Prudhoe Bay on Alaska’s north coast to Valdez in the south, the source of countless spills over its 30-year history; both support drilling in the Arctic National Wildlife Refuge (ANWR); and both are longtime climate-change skeptics. (Young once declared that environmentalists are “a self-centered bunch of waffle-stomping, Harvard-graduating, intellectual idiots” who “are not Americans, never have been Americans, never will be Americans.”)

Palin has at times sought to separate herself from these political veterans on ethical grounds, though between 2003 and 2005 she served as a director of a 527 group organized by Stevens. (Both congressmen have been investigated—and Stevens is now under federal indictment—for dealings with Veco, an oil services company.) She has even won kudos for “taking on the oil companies” over state control and state taxes on the industry. But when it comes to core energy policy, she is up to her neck in the same barrel of oil as her fellow Alaska Republicans. Should Palin become vice president, state Republicans will be well positioned to put federal clout behind Alaska’s back-to-the-future approach to energy.

Palin’s political experience consists of governing a state whose economy has more in common with Kuwait or Venezuela than it does with any other part of the United States. The oil and gas industry provides 85 percent of the state’s revenues, and thus pays for most of its public services. Alaska’s residents pay no state income or sales tax. While Palin’s push to impose a state version of the windfall profits tax on the booming industry compare not favorably to the actions of congressional Republicans, she is an enthusiastic supporter of what the oil giants want most: to extract more oil and gas from Alaska and its adjoining waters. “We Americans need to produce more of our own oil and gas,” she said last week in her vice presidential acceptance speech. “And take it from a gal who knows the North Slope of Alaska: We’ve got lots of both.”

The oil and gas currently being extracted from Alaska’s North Slope and the adjoining areas is but a trickle from the energy trove that lies beneath the frozen waters of the Arctic Ocean. One 2007 study by two British consulting firms calculated that the already known reserves in the Arctic Basin total some 233 billion barrels, with “potential additional resources” estimated at 166 billion barrels. In a grim case of poetic injustice, it is global warming that stands to make the Arctic’s fossil fuels more accessible to oil and gas drilling. As the Arctic warms at almost twice the rate of the rest of the world and ocean ice melts, the industry is poised to launch a blitzkrieg to exploit these resources and bring them to the lower 48, and abroad to what will soon become the largest energy market in the world—China—with India not far behind.

In particular, the rapid melting of Arctic ice will reduce the costs of transport by opening up the frozen Northwest Passage, providing an ocean-to-ocean “Suez of the North.” Michael Byers, a Canadian legal expert on this subject, has noted that changing ice conditions offers a sea route between Asia and the East Coast of the United States that is “7,000 kilometers shorter than the route through the Panama Canal.” The Northwest Passage could also accommodate supertankers and container ships that are too large for the canal. Byers writes, “International shipping companies are eyeing the fuel, time and canal-passage fees that could be saved; some are already building ice-strengthened vessels.”

In addition to opening new shipping routes for oil tankers, the industry has long dreamed of transporting the Arctic’s abundant natural gas via a pipeline running through Alaska and Canada to the lower 48. Palin made support for the pipeline a major issue in her 2006 campaign for governor—and here, again, she has been praised for running a hard bargain with Big Oil over the terms of the pipeline deal. She recently chose the Canadian energy company TransCanada to receive $500 million in state subsidies for a pipeline stretching over the Brooks Range and down through Alberta to US markets. Oil giants BP and ConocoPhillips—which along with ExxonMobil hold leases to much of the North Slope’s natural gas, and which also had a pipeline proposal on the table—have since announced that they plan to build their own pipeline, without help from the state.

However it is transported, Palin’s elevation to national office would help give the companies a free hand when it comes to extraction, with little concern for environmental impact: This spring, the state of Alaska announced that it would sue the US Fish and Wildlife Service to block the addition to the endangered species list of Alaska’s polar bears—which, if their habitat were protected, might pose an obstacle to the pipeline and other development. She has also opposed protecting beluga whales in waters slated for oil and gas drilling (and she has backed a plan that allows the aerial hunting of bears and wolves). She is a steadfast booster of opening ANWR to drilling (a move that McCain opposes). And she has said that while she is concerned about climate change, “I’m not one though who would attribute it to being man-made.”

Fully exploiting Alaska’s petroleum resources, however, could wind up drawing the United States into an international conflict. The national demarcation lines beneath the waters of the Arctic Ocean are already disputed, and tensions will only increase as the ice continues to melt. The United States will also need to defend its right-of-way to one of the world’s most salient choke points, the Bering Strait, where it faces Russia across a few miles of water—raising the potential for a new Cold War. The struggle for control of Arctic energy promises to create some more surprising enmities, as well. Already there is friction between the United States and Canadian defense establishments over who is to dominate the defense of the Arctic, with Canada putting more ships and weapons into its North to protect itself—not from the Russians, but from its neighbor America. Should these kinds of tensions heat up, Big Oil will want an administration in the White House that is willing to protect the industry’s global interests.