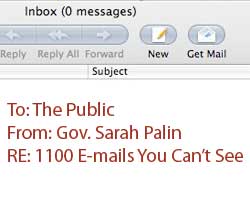 The Palin administration won’t release hundreds of emails from her office, claiming they cover confidential policy matters. Then why do the subject lines refer to a political foe, a journalist, and non-policy topics?

In June, Andrée McLeod, a self-described independent government watchdog in Alaska, sent an open records act request to the office of Governor Sarah Palin. She requested copies of all the emails that had been sent and received by Ivy Frye and Frank Bailey, two top aides to Palin, from February through April of this year. McLeod, a 53-year-old registered Republican who has held various jobs in state government, suspected that Frye and Bailey had engaged in political activity during official business hours in that period by participating in a Palin-backed effort to oust the state chairman of the Alaska Republican party, Randy Ruedrich. (Bailey has been in the national news of late for refusing to cooperate with investigators probing whether Palin fired Alaska’s public safety commission because he did not dismiss a state trooper who had gone through an ugly divorce with Palin’s sister.)

In response to her request, McLeod received four large boxes of emails. This batch of documents did not contain any proof that Frye and Bailey had worked on government time to boot out Ruedrich. But there was other information she found troubling. Several of the emails suggested to her that Palin’s office had used its influence to reward a Fairbanks surveyor who was a Palin fundraiser with a state job. In early August, McLeod filed a complaint with the state attorney general against Palin, Bailey, and other Palin aides, claiming they had violated ethics and hiring laws. Palin, now the Republican vice-presidential candidate, told the Alaska Daily News that “there were no favors done for anybody.”

But more intriguing than any email correspondence contained in the four boxes was what was not released: about 1100 emails. Palin’s office provided McLeod with a 78-page list (PDF) cataloging the emails it was withholding. Many of them had been written by Palin or sent to her. Palin’s office claimed most of the undisclosed emails were exempt from release because they were covered by the “executive” or “deliberative process” privileges that protect communications between Palin and her aides about policy matters. But the subject lines of some of the withheld emails suggest they were not related to policy matters. Several refer to one of Palin’s political foes, others to a well-known Alaskan journalist. Moreover, some of the withhold emails were CC’ed to Todd Palin, the governor’s husband. Todd Palin—a.k.a. the First Dude—holds no official state position (though he has been a close and influential adviser for Governor Palin). The fact that Palin and her aides shared these emails with a citizen outside the government undercuts the claim that they must be protected under executive privilege. McLeod asks, “What is Sarah Palin hiding?”

The list of still-secret emails includes a series of messages that circulated on February 1, 2008, among Palin, Bailey, Frye, and Todd Palin “re Andrew Halcro.” A former Republican, Halcro ran as an independent against Palin for governor in 2006, collecting only 9 percent of the vote. Since then he has been a blogger who often criticizes Palin. There is no telling what the emails said about Halcro. But in a July blog posting, Halcro asked, “why in the world is Todd Palin getting copied on emails [about me] that his wife’s administration is classifying as confidential….These emails should be released to the public….after all Todd Palin has no standing to claim executive privilege. By including him in the email loop, the Palin administration has arguably breached any claim of executive privilege.” And McLeod wonders, “What do emails about Andrew Halcro have to do with policy deliberations?”

The list of confidential emails includes a number of communications related to the Public Safety Employees Association, a union for the state’s police officers and state troopers, and the headings refer to PSEA ads and a “PR campaign.” Many of these PSEA-related emails were CC’ed to Todd Palin—and were also withheld under the deliberative process and executive privileges. (Recently, John Cyr, the PSEA executive director, told The Washington Post that Sarah Palin held a grudge against the state troopers and held down their salaries and other funding because her ex-brother-in-law-the-trooper had not been fired.) A separate email sent from Frye to Bailey and Todd Palin and headed “I may be in trouble here guys” was withheld because it involves a personnel matter. In April, a series of emails with the subject line “from Sheila Toomey” zipped between Sarah Palin, Bailey, Frye, other Palin aides, and Todd Palin. Toomey writes the “Alaska Ear” political gossip column for the Anchorage Daily News. These emails were also withheld under the deliberative process and executive privileges. And a string of emails titled “Racism on the Radio” that went back and forth between Governor Palin and her aides was blocked from release on the same grounds.

McLeod says she intends to file an appeal of the decision to withhold the emails on the 78-page list.

Palin has denounced McLeod’s efforts. After McLeod filed the ethics complaint, Palin told the Anchorage Daily News, “This is the same Andrée McLeod that follows us around at public events and camps herself out in our waiting area and hounds us for a job, asking us if there’s a way she can…not have to go through the system to get a job with this administration.” Palin also called McLeod “the falafel lady,” because McLeod once sold falafel. On his website, Halcro has posted excerpts of emails Palin sent McLeod between 2002 and 2005, in which she praised McLeod. In one of these messages, Palin wrote, “You’re all about accountability.” In another, Palin said, “Thanks for working to instill the public trust.” Palin also wrote her, “I’m proud to know you.” And in one email, Palin hailed McLeod: “Holy Moly you are powerful regarding getting the word out to the press about questionable activity.”

“I’ve known Sarah for years, ” says McLeod, who moved to Alaska from New York in 1978. “When the finger is pointed at somebody else, she’s all for accountability. When it’s pointing at her, it’s different. Sarah Palin was elected on the basis of providing open and honest government. She has failed miserably.”

The McCain-Palin campaign did not respond to phone and email requests for a comment.

UPDATE: McLeod has filed an appeal in the case of Sarah Palin’s secret emails. See here.