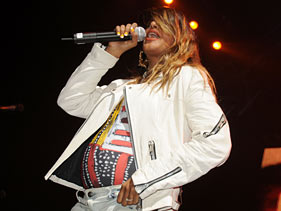 Sure, I’m as guilty as anyone. All of us here tend to get all whipped up into a frenzy every time something silly about Palin pops up over at HuffPo, for instance, but come on, doesn’t that say “Arts & Culture” up there under “The Riff”? Commenters (and even other MoJo contributors!) may find this arty little blog a lightweight intrusion into their serious non-profit matters, but I say we take a breather from the campaign and focus on what’s really important: what M.I.A.’s been up to. OMG, she’s got a wee Arulpragasam in the oven! The singer confirmed her pregnancy to Pitchfork, naturally, over the weekend, saying she’s “creating a baby,” assumedly with the help of her fiancé Ben Brewer. By the way, not only is Brewer the singer for New York band the Exit, he’s also the son of Warner Music Group CEO Edgar Bronfman. Hmm, is M.I.A. pulling a McCain, marrying up, for a little bit of—oh, damn, sorry, I promised I wouldn’t talk about politics.

Back to M.I.A.: while the singer grabbed headlines when she appeared to announce her retirement onstage at Bonaroo in June, she emerged from this brief hiatus on Saturday at a Diesel-sponsored shindig in New York to do a few numbers as well as her part in T.I.’s amazing “Swagga Like Us.” The party, which also featured Franz Ferdinand and N.E.R.D., was apparently the hottest ticket of the year, with thousands (!) of partygoers reduced to tears when they couldn’t get in. Vulture’s roundup of the event positively oozes with self-satisfaction at being one of the lucky V.I.P.’s who made it inside, but I admit I’m secreting massive amounts of jealousy. Ahem.

The singer’s breakout hit, “Paper Planes,” has settled down to #17 on the iTunes most-purchased list, but is still hanging around the Billboard Top 10, slipping from 9-10 this week, after peaking at #4. She told Pitchfork that “Planes” turned into a hit the same week she found out she was pregnant, saying “it seemed like the whole world was reshuffled in one week.”

And finally, M.I.A. is one of a short list of artists whose music will now be made available on a new format: a teensy memory card they’re calling “slotMusic.” The little chippies will come loaded with DRM-free MP3s and will plug into lots of doodads, although why anyone’s still developing physical music formats is beyond me. Haven’t they heard of the internet?