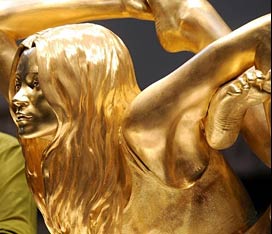 Is this, finally, the last sign of the impending apocalypse? Or are things going to get even worse? Artist Mark Quinn has immortalized model Kate Moss in actual 18-carat gold in a sculpture on display at the British Museum in London. No, it’s not solid gold, but weighs “about as much as the supermodel herself,” which means it’s worth around 2.5 million bucks, even melted down. Elevating the low and immortalizing the ephemeral are of course standard tropes in art (and even on the Riff!) but it sure seems like pushing the insanity envelope has really taken off in sculpture lately. Here are some of the more jaw-dropping recent three-dimensional examples of why our culture is in a hedonistic free-fall. Needless to say, many of these links will not be safe for work. 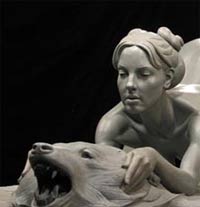 Monument to Pro-Life: The Birth of Sean Preston, 2006
It was only a couple years ago that art and pop music lovers were treated to Daniel Edwards’ idealized interpretation of Britney Spears giving birth on a bearskin rug. Formed out of what looks like grayish clay, the sculpture is of course eyebrow-raising for its explicitness, but doesn’t utilize rare or luxury materials, so it ends up being oddly earthy, despite the kooky anti-abortion connections that seem like they might be a joke. 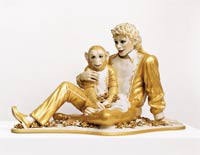 Michael Jackson and Bubbles, 1988
Jeff Koons basically originated this whole silly-celebrity-in-gaudy-sculpture thing with his ceramic take on the King of Pop and his little monkey friend. Said to be the world’s largest ceramic, it’s also plated in real gold leaf. And there are four of them. At least the original exhibition was called “Banality.” 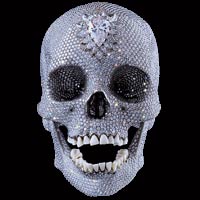 For the Love of God, 2007
No piece on crazy sculpture would be complete without mentioning Damien Hirst, whose “Physical Impossibility of Death in the Mind of Someone Living,” featured a dead shark in a tank (preceding the plastination art craze). But I do have to say that I really like “For the Love of God,” a diamond-encrusted skull which, inspired by Mexican skulls covered with turquoise, has an oddly folksy charm. The skull features 8,601 diamonds costing £14 million (around 25 million bucks at today’s exchange rate), and while Hirst claims it sold for £50 million cash, nobody believes him.

Crazy Japanese sculptures of giant-breasted dolls (last year?)
Boy, mentioning “Japan” in an article about crazy sculpture is just opening up a can of worms, but here we go. Boing Boing pointed this out last year, and the page it links to is in Japanese, so I’m not sure who made these or why. Actually I suppose I do know why: If you ever wondered what it would look like if a little six-inch doll had six-foot breasts, well, now you know.

Basically anything nominated for the Turner Prize
As I’m looking through the recent history of crazy sculpture, many of the grossest seem to turn up at the Tate Britain for this annual prize for a British artist under 50 years old. People having sex, bodies being eaten by maggots, KFC menus cast in lead, the Turner’s got it all. This year’s nominees include Cathy Wilkes, whose piece, entitled I Give You All My Money, features two female mannequins, one on a lavatory with random stuff hanging from her head. The Financial Times called it “feeble.”