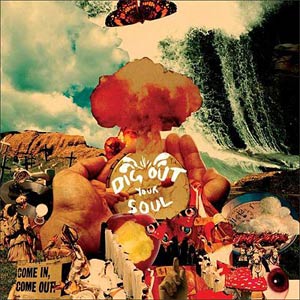 Oh, MySpace, how I hate you, let me count the ways. Your layout is nonsensical and counterintuitive, making even the simplest tasks an exercise in frustration. Your 96kbps streaming mp3s sound crunchy and terrible, and start right up at unexpected volumes when you click over to a profile. Your culture of friend-accumulation feeds a fame-for-being-famous culture that’s making our children morons. But you got slightly more tolerable this week, after retooling your music player widget and announcing MySpace Music, which is basically an agreement with major labels to allow streaming of full songs and albums on the MySpace site. This has been mostly Imeem‘s zone for a while, although as this article in Time comparing the services points out, MySpace will get music directly from labels, while Imeem relies on fans to upload songs. So I guess Imeem will continue to be the quirky place to find old Cure songs, while MySpace will have the inside scoop on brand new music, like, say, the new Oasis album, Dig Out Your Soul, which you can listen to in its entirety right now over here.

While I have a hard time judging music based on low-quality mp3s, and it seems kind of ironic that an album with such an electric title would allow itself to be dulled so severely, there’s a lot to like on Soul. I’ve always been a big fan of Oasis, and have never really understood the standard criticism of them as Beatles imitators—when I first heard “Supersonic” back in 1992, I scribbled down “Oasis: the new Ride?” in my notebook, which is pretty hilarious in retrospect, (considering the eventual disparity in their incomes) but points out what I like about them both: rich, swirling walls of chiming guitar sound, often with a melancholy edge. Sure, Oasis sometimes settles back into standard balladry, which they did so famously on “Wonderwall”; they revisit that territory to far less successful effect here on “I’m Outta Time,” whose piano chords are definitely a little too Beatles-y. But first single “The Shock of the Lightning” is a blazing, propulsive stomper, shifting between a minor and major chord as singer Liam Gallagher encourages, “Come in, come out, tonight.” Liam has always had one of the great rock voices, gravelly and casual but somehow pure and guileless, perfectly calibrated to rise above those roiling waves of thick guitar noise. About 80% of the time he doesn’t make any sense at all (“Love is a time machine/Up on the silver screen”?!?) but that’s never stopped me from loving a band… I’m talking to you, New Order.

It’s been a long time since this band’s creative peak on (What’s the Story) Morning Glory, 13 years in fact, and there are moments here where they seem to stretch a little too far in an attempt to try something new. “Get Off Your High Horse” tries a countrified swing but lands pretty squarely in Dandy Warhols territory; not that that’s entirely a bad thing, I guess. “Falling Down,” however, with its odd keyboards, psychedelic echoes, and syncopated rhythm, is like a more somber version of Noel’s collaboration with the Chemical Brothers, “Let Forever Be,” and “The Turning” has a hypnotic, jazzy quality in the verses before erupting into noisy cacophony for the chorus: “When the rapture takes me, you’ll be by my side.”

Towards the end, the album kind of peters out, with “The Nature of Reality” awkwardly wrapped around a triple-time rhythm, and closer “Soldier On” stealing a beat from Queens of the Stone Age and forcing all the lyrics through an irritating repeater: “Won’t (won’t), be long (be long).” It’s a flawed album, for sure, and maybe a third of it can be skipped. But when it works, it’s a reminder of the only-slightly faded glory that brought thousands to Knebworth 12 years ago.

Dig Out Your Soul is out October 7th.