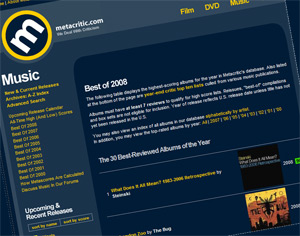 Metacritic is a pretty cool service, tracking down and averaging reviews of all sorts of pop culture output for our convenience. Movies, DVDs, games, TV shows, and music, Metacritic logs ’em all, grabbing reviews from all corners of the press and converting grades or ratings to a 100-point scale. For the busy culture afficionado, it allows for straightforward, easy inspection of critical reaction. For instance, Wall-E and Man on Wire currently top their movie list for 2008, and that makes sense: one’s a popular hit, and one’s a critical favorite. In 2007, their “Best-Reviewed Albums of the Year” served as a good jumping-off point in analyzing the year in music, but this year, their list has kind of gone off the deep end. After the jump, the Metacritic Top 20 (with score averages in parenthesis) and why it’s a little weird.

Where do I start? At the top, ’nuff respect to Steinski, whose cut-and-paste creations influenced everything from Girl Talk to The Avalanches. But jeez, I’m a musical collage artist (er, a wannabe artist) myself, and even I think this stuff has more intellectual appeal than “listenability.” It’s really just acid house, which had a brief flash of popular ascendance in the mid-to-late-’80s, and its fast-paced collage of musical and non-musical vocal samples (see M.A.R.R.S. “Pump Up the Volume”) sounded fresh and exciting for about 3 years. Then came Prince’s “Batdance.” Shudder. Of course, it’s vital to for critics to support musical collage as valid art, but album of the year?

At #2, The Bug have made an interesting album that distills a lot of the current reggae-inflected U.K. sounds under the aegis of “dubstep,” although some of the tracks on Zoo are really reggaeton or dancehall. The Bug’s version of dubstep, a sludgy, glacially-paced genre at the bleeding edge of musical trends, is accurate enough, but the album suffers from a typical problem with dance music edge-cutters: it sounds great when anonymous singles are mixed by a DJ in a dark club, but can get a little tiring on an album.

Plush’s Fed is a bafflingly self-indulgent Beatles-meets-Jackson-Browne jam session, Bon Iver makes strong but not exactly boundary-pushing acoustic folk, and only at #5 do we find, well, an album I love. What’s the problem here? Well, first of all, Metacritic only requires seven reviews before an album can qualify for their list, and in this day and age, that’s not too hard. The Steinski album counts Sputnikmusic, The Wire and cokemachineglow in its top reviews, and The Bug only has ten reviews total, half of them from the U.K. press. Plus, a single, random 100-point review can bring an album’s average way up. I don’t mean to be undemocratic here, Metacritic, but maybe bringing the minimum review count up wouldn’t be a bad idea, and perhaps throwing out the highest and lowest scores might help bring things back down to earth. Of course, readers interested in what the actual best albums of the year are need only pay attention to the Riff, where the definitive list will be posted in late December.