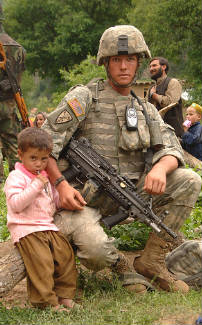 Today, the U.S. Army released it’s “Stability Operations Field Manual” (.pdf), which places humanitarian and relief work at the center of its strategic focus. The manual follows two earlier documents issued in 2005 (National Security Directive 44 and Department of Defense Directive 3000.05), which first paid institutional attention to the need to adjust the military’s approach to 21st century conflicts—both issued amid widespread criticism that the Bush administration did not adequately prepare for its occupation of Iraq. (Read my piece about Directive 3000.05 here.) But the new Army field manual solidifies these earlier orders and will shape how GIs are deployed for years to come.

The manual had been in the works for 10 months and was shepherded to completion by Lt. Gen. William B. Caldwell IV, commander of the Army’s Combined Arms Center at Ft. Leavenworth, Kansas. His predecessor was none other than David Petraeus, who authored the Army’s new counter-insurgency manual and went on to implement it in Iraq.

As Caldwell explained to the Washington Post, the importance of what comes after the Army’s traditional bailiwick of killing people and breaking things has been weighing on his mind for some time. While preparing for the Panama invasion in 1989, “we never once talked about once we took down [Gen. Manuel] Noriega, what then?” he said. “We only thought about the clenched fist, and someone else would get the trash picked up and get the water plants working.”

Theoretically, at least, such omissions of planning will be avoided in the future. From Caldwell’s introduction to the new Army manual:

…the greatest threat to our national security comes not in the form of terrorism or ambitious powers, but from fragile states either unable or unwilling to provide for the most basic needs of their people.

…Military success alone will not be sufficient to prevail in this environment. To confront the challenges before us, we must strengthen the capacity of the other elements of national power, leveraging the full potential of our interagency partners.

America’s future abroad is unlikely to resemble Afghanistan or Iraq, where we grapple with the burden of nation-building under fire. Instead, we will work through and with the community of nations to defeat insurgency, assist fragile states, and provide vital humanitarian aid to the suffering. Achieving victory will assume new dimensions as we strengthen our ability to generate “soft” power to promote participation in government, spur economic development, and address the root causes of conflict among the disenfranchised populations of the world. At the heart of this effort is a comprehensive approach to stability operations that integrates the tools of statecraft with our military forces, international partners, humanitarian organizations, and the private sector.