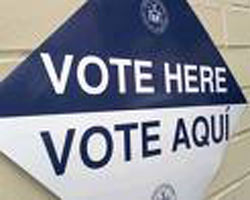 In an area of Albuquerque known as the “War Zone” for its high crime rate, retired Army infantry officer Juan Santiago Delgado sits on top of a refurbished motel bed in the New Mexico Veterans Integration Center, a transitional home for veterans down on their luck. Delgado has been deeply affected this year by rising gas prices, food costs, and medical bills. “It’s affecting all of us,” he says. “The new president has got to have some damn balls and do something for this country, not just talk.”

In the nearby barrio of Barelas, fellow Vietnam veteran Juan Jose Pena agrees that finances will affect how he votes. “The economy trumps everything right now,” he says. Pena, a 62-year-old freelance court reporter, earns a pretty good salary in a state ranked 3rd nationwide for the number of people living below the poverty level—but spends most of it supporting family members who can’t support themselves, and ignoring a needed spinal surgery he says he can’t afford to have. But if regaining economic health is so important to both men, so similar in so many ways, why are Delgado and Pena planning to vote for opposing presidential candidates this November? That’s a question both campaigns are trying to answer—fast.

Both McCain and Obama have mobilized heavily in the swing state of New Mexico, where a cross section of some of the most important voting constituencies is found: military veterans, immigrants, and Hispanics.

Though voter registration in New Mexico favors the Democratic Party 50 to 33 percent, “the days when the Democrats could just assume they would get 85 percent of the Hispanic vote, those days are over,” says Brian Sanderoff, an independent pollster.

In 2000, Al Gore won the state by a mere 366 votes; President Bush won by a few thousand in 2004. In a state with more than half a million registered Hispanic voters—almost 40 percent of the New Mexico electorate—whichever candidate can woo voters like Delgado and Pena is a good bet to win the White House. “The Latino-Hispanic vote will literally swing the state, whether it be blue or red,” says Ivette Barajas, Spanish communications director for the Republican Party of New Mexico. “It’s a very important vote, and both parties are recognizing that.”

Democrats face a tough challenge from Republicans trying to court Hispanics in this border state, where much of the community is socially conservative. Republicans hope McCain’s record on immigration reform, his understanding of Latino-Hispanic issues as a senator from a neighboring state, and his pro-military rhetoric (in a place that has several defense-related industries) will capture the Hispanic vote this year.

“I’m voting for McCain because he spent five years as a prisoner of war in Hanoi and knows the importance of a strong military,” says Delgado. “Obama is a senator, but he doesn’t have all the leadership qualities that are needed to do something about our current situation.”

To reach voters like Delgado, this spring Barajas and the Republican Party of New Mexico helped launch PoliticalVida.com , a conservative-leaning website aimed at giving Hispanics throughout the nation a place to talk about issues important to them—and to learn more about the Republican Party.

But the issues that the Hispanic community in New Mexico face cut across party lines; like everyone, it is affected by the nation’s economy.

“The economy is probably the driving issue these days given gas prices, the cost of food, and everything escalating,” says Gabriel Sanchez, a professor of political science at the University of New Mexico. “That, and folks holding the Republican Party accountable for the economic times we’re in is probably swaying a lot of folks, not just Hispanics, back toward the Democratic Party.”

“It all depends on how the candidates are able to posture themselves,” says Fernando de Baca, former chairman of the Republican Party of Bernalillo County. “In the Hispanic community, assuming that they turn out to vote, and we have to assume they will, they’re going to have a tremendous influence on the outcome. There’s no doubt in my mind.”