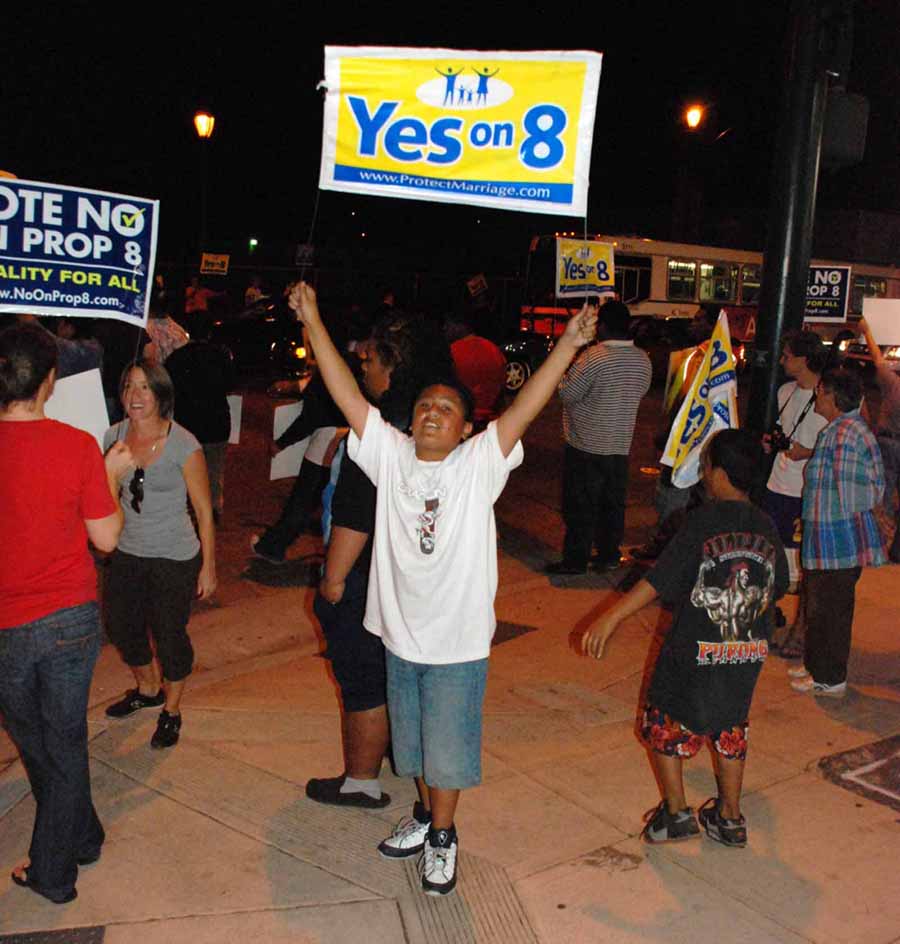 Another night of Prop 8 campaigning in east Oakland, this time with supporters and opponents of the ban on gay marriage verbally battling face to face. At least 150 people packed each streetcorner, spilling out into traffic causing tie-ups in traffic and mayhem (I counted 14 police cruisers at one point) with cars honking and both sides yelling back and forth for hours. There was so much energy and anger in the air, people of all races, ages, and backgrounds, so passionate and fervent in their beliefs, taking to the streets. But I kept thinking, what a tragedy, that such energy is wasted on this fight.

Mormon churchgoers have been rallying for Prop 8 at this intersection for several days now and in response neighbors organized via email to counter the message in person with messages of their own. Their message: “Equality for All,” “Don’t Discriminate, No on 8” and “Say No to Hate, No on 8.” The chants were dirtier tonight on the Yes side, along with “Save Our Children” and the “Protect Marriage” there were plenty of “Don’t Hate, Be Straight” and “Stop the Virus AIDS” chorus rounds.

Last night I was surprised when one young woman told me the only mark on the ballot she’ll make is for Prop 8. Tonight I heard a chorus of the same. “Gay marriage is an abomination under god and it shouldn’t be taught to children in our schools,” said Cassandra Jones, 33, a black woman who’s also voting for Obama but added, “If it’s Obama or McCain, it doesn’t matter, this matters, because children are our future.”

In fact, there’s not a word in the proposition that mentions education or any mandate for schools. So all of the concern for kids in schools, who will be learning they can “marry a princess” is thanks to misleading ads. Unfortunately that scare argument seems to be working, Prop 8 is gaining in the polls.

One pro- woman told me she was from a nearby baptist church. But she wouldn’t tell me which one, and I saw her last night with the Samoan churchgoers who said they were there together with their Mormon community. I think she didn’t want to tell me she was Mormon, to distance the church from the campaign. “It’s not about hate, or civil rights, it’s a mentality,” she said. “We are here on earth to be replenishing. There can be no future generation if Ann marries Mary.”

The No-on-8ers carried banners, crossed the streets when the pros did, a couple of women kissed purposely in a sea of yellow yes signs, some were crying, most were silent, signs held high. Elyse Hochstadt, who organized the response offered this: “I may not agree with the way a lot of people live, but I don’t want to take away their freedoms, their right to live as they choose. Once again, here’s a religious agenda in our democratic state.” She was compelled to act after seeing all of the kids with signs. “They have no idea what they’re out here for; it’s utter propaganda.”

There were A LOT of kids, some as young as six, and plenty of teenagers. They carried banners back and forth and planned to stay till midnight, and come back every night. The No team will likely be back as well. No on 8 protester Molly Kenefick, who yesterday was spit on and told “to die of AIDS” at a Prop 8 rally in a nearby neighborhood is undeterred. “You know what’s as strong as an army? An idea whose time has come. Sure,” she added holding up her hand-painted “Jesus Didn’t Teach Hate” sign, “if Prop 8 passes it will be a setback. But the time for equality is here.”