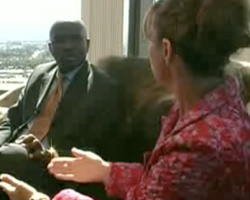 In August 2007, Sarah Palin sat down with controversial conservative columnist and TV/radio host Armstrong Williams in Palin’s Anchorage offices. In the 35-minute long interview, which is available on YouTube and was taped for Armstrong’s TV show The RightSide, Palin sits on a couch bearing a full-length bear skin, speaking naturally and easily. Unencumbered by tough questions—Armstrong asks how Alaskans deal with the long hours of darkness they face in the wintertime, for example—and the glare of the national spotlight, Palin comments intelligently on a variety of topics but also says a number of things she would think twice about saying today.

Armstrong notes repeatedly that at the time of the interview Palin is the most popular governor in the country. When he asks Palin for the secret to her success, she says, “The biggest mistake that a politician can make is trying to fake it, trying to pretend you know more than you know. You know, voters are smarter than that. The public in general is much smarter than that and they know when you’re trying to fake it, so just be honest with people.”

The comment is ironic considering Palin’s performance in the past few weeks, which has even conservatives like David Brooks and George Will admitting that Palin is in over her head. Her attempts to bluff her way through questions on subjects like the Supreme Court and the Bush Doctrine appear to be the definition of “trying to fake it.”

Following up on the subject of Palin’s popularity, Williams asks what the success women are seeing in politics—the interview takes place with Hillary Clinton leading in the Democratic primary—says about the country. Palin responds by echoing Barack Obama’s rhetoric. “It’s also, I think, a message that many Americans are just really hungry for something different, for a change.”

When asked about Iraq, Palin says that she supports the mission and invokes the now-familiar line that America should fight the terrorists “over there” instead of “over here.” She also says that her oldest son, Track, is considering joining the military and that if he does so, she will support him. (He has since done so.) But Palin expresses doubt about where the war is headed. “Doggonit, it’s tough personally to say it’s a never-ending conflict that we’re going to be part of,” she says. “I want to know that there is a good outcome, that there is a good end. There is no guarantee of that. We have no crystal ball to find out what it’s going to be to wrap this up and let our troops come home.”

The comments echo a statement Palin made in early August 2008, before she was chosen to be John McCain’s VP:

…looking at the situation we are in right now, at war, not knowing what the plan is to ever end the war that we’re engaged in, understanding that Americans are seeking solutions, and they are seeking resolution in this war effort, so energy supplies, being able to produce and supply domestically, is going to be a big part of that.

….I have a 19 year old who’s getting ready to be deployed to Iraq. His Stryker brigade will leave on September 11th of this year. He’s 19, he’ll be gone for a year. [And so] kind of on a personal level, when I talk about, umm, the plan for the war, you know, let’s make sure we have a plan here, and respecting McCain’s position on that.

Taken together, the comments can easily be seen to suggest support for a timetable to end the war, a position supported by Barack Obama and currently being negotiated by the Bush Administration and the Iraqi government. A timetable is opposed by the McCain-Palin ticket.

Palin also takes a very different view of scrutiny than she does now. She has stonewalled an investigation into whether she twisted arms to have a state trooper fired in order to settle a family dispute, and she has hid from the press since joining the McCain ticket. But in speaking with Armstrong, she said, “You have to be willing to be absolutely scrutinized though in all of your actions if you want to serve in public office. Public officials should be held to a higher standard, I think…. Don’t be willing to be sign your name on the bottom line as a candidate, unless you’re willing to be scrutinized.”

It appears Sarah Palin was for scrutiny before she was against it.