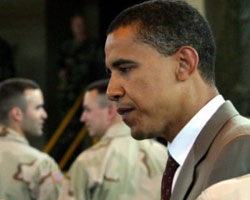 As the Obama transition continues, there’s much speculation as to whom the president-elect will ask to head the Pentagon and whether he might invite Robert Gates to stay on. Less attention, however, has been paid to a critical, but related, issue: Will Gates or his successor be able to make good on Obama’s promise to cut “tens of billions of dollars in wasteful spending” from the military budget? On the campaign trail, Obama frequently cautioned that changing the federal government will not be easy. Perhaps nowhere will this be truer than in the Pentagon’s ossified bureaucracy. Reforming it may be the toughest job in Washington. In pursuing this mission, Obama and his man (or woman) at the Pentagon will face opposition from entrenched interests in the uniformed military and private industry, as well as on Capitol Hill.

The Pentagon is used to getting what it wants, as evidenced by its recent spending spree. The “base” defense budget, which excludes the expense of the wars in Iraq and Afghanistan, has grown 40 percent since 2001 to an estimated $518.3 billion requested for fiscal year 2009. But this doesn’t tell the whole story. If you figure in other military expenditures, such as those incurred by the departments of Homeland Security, Energy, Veterans Affairs, and the numerous defense “supplemental” bills that the Bush administration has relied on to fund its foreign adventures, US defense spending stands at a staggering $863.7 billion. This exceeds the collective annual defense spending of the world’s militaries combined.

The issue, though, is not only how much the Pentagon is spending, but the bang it’s getting for all these bucks. Much of its budget is tied up in big-ticket, high-tech weapons programs, such as the Air Force’s F-22 fighter, the Army’s “Future Combat Systems” program, and the Navy’s next-generation fleet of destroyers and coastal combat vessels. All of these programs are behind schedule and over budget—and of questionable relevance to the needs of today’s military.

Take the F-22. The Air Force, which began developing the fighter in 1986, originally intended to buy more than 700 of them to replace its aging fleet of F-15s and F-16s. By 2000, cost overruns led the Pentagon to halve its order to 346. But in 2005, almost 20 years and $40 billion later, the request was lowered again to just 180 aircraft, the consequence of lengthy delays and unanticipated development costs that had pushed the price per airplane from an earlier projection of $184 million to $355 million. To fill the void in inventory, the Air Force has now begun developing the F-35 Joint Strike Fighter, which critics say promises a repeat of the F-22 fiasco. “The last I heard, Al Qaeda doesn’t have an air force,” says Winslow Wheeler, director of the Straus Military Reform Project at Washington’s Center for Defense Information and the editor of the forthcoming book America’s Defense Meltdown: Pentagon Reform for President Obama and the New Congress. The F-22, which he describes as a “dog” on performance (more fragile and less maneuverable than Vietnam-era fighters), “is ridiculously expensive, and its huge cost prevents you from buying a respectable inventory of them.”

But focusing on individual boondoggles like the F-22 is not the solution, says Wheeler. Instead, if Obama hopes to switch things up, he and his aides must understand that cost overruns and development delays at the Pentagon are not the exception but the rule. “I’m all for getting rid of the garbage, but if we simply trot out a cut list, we’re going to get killed,” Wheeler says. “The advocates [for each weapons program] inside the Pentagon will go on full alert. They’ll activate their porker friends inside Congress, and that will be the end of it.” Rather, he suggests, change rests on getting decision makers the real, unvarnished information they need to grapple with structural problems inherent in the defense acquisitions system.

Getting that information is not as easy as it might seem. According to retired Marine Lt. Colonel John Sayen, a former Pentagon analyst, the Defense Department’s procurement bureaucracy is practiced at pushing its wish list through Congress “by downplaying costs and/or exaggerating benefits” and “quickly building a support network of vested interests to lock in a front-loaded decision before its true costs or performance become apparent.” In other words, military procurement is an institutionalized scam. Even when problems surface, Congress rarely interferes. Assembly of the F-22 alone involves spending in 44 states, says Wheeler, and “people on Capitol Hill are leaving drool trails in the hallways to buy more.”

Still, there are signs that some in the Pentagon understand that the free-spending days of the past may be ending. The Defense Business Board, a Pentagon advisory panel that includes about 20 private-sector executives, recently prepared a series of briefings for the incoming Obama administration, highlighting the Defense Department’s runaway budget and acknowledging that it cannot continue. “All indications are that Department is entering a prolonged period of fiscal constraint in a tough economy with deficits increasing and competitive spending pressures,” one of the briefing documents reads. “Business as usual is no longer an option. The current and future fiscal environments facing the Department demand bold action.”

Will the Obama administration be the one to provide it? The forces of status quo are well positioned within the Pentagon and Congress, so much will depend on whether Obama picks a Pentagon chief who is willing to take on the bureaucracy while the nation is still prosecuting two wars. Among the people rumored to be in line for the job is Richard Danzig, who served as secretary of the navy during the latter years of the Clinton administration. While in that position, Danzig did not earn a reputation as an opponent of Pentagon bloat. “He was a mess as secretary of the Navy,” says Wheeler. “That’s not the kind of help President Obama will need to clean out the stables.” The question remains, when Obama’s agenda of change meets the Pentagon, which side will win out?