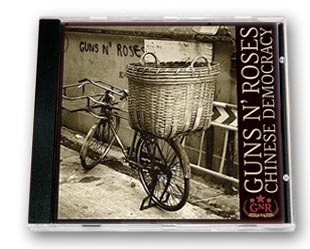 It’s here: early this morning, the entirety of Chinese Democracy, the new album from Guns N’ Roses and their first in 17 years, was posted to their official MySpace page for your 96kbps listening pleasure. The physical CD will go on sale exclusively at Best Buy stores this Sunday, breaking with the odd tradition of Tuesday releases—speaking of democracy, could we do that with elections too? Anyway, Jon Pareles has a lot of fun with it in the Times today:

“Chinese Democracy” is the Titanic of rock albums: the ship, not the movie, although like the film it’s a monumental studio production. It’s outsize, lavish, obsessive, technologically advanced and, all too clearly, the end of an era. It’s also a shipwreck, capsized by pretensions and top-heavy production. In its 14 songs there are glimpses of heartfelt ferocity and despair, along with bursts of remarkable musicianship. But they are overwhelmed by countless layers of studio diddling and a tone of curdled self-pity. The album concludes with five bombastic power ballads in a row.

David Fricke in Rolling Stone is more generous, giving the album 4 out of 5 stars, calling it a “great, audacious, unhinged and uncompromising hard-rock record.” He takes the album’s bombast as a sort of self-fulfilling prophecy of rockitude, no matter what it actually sounds like. He can’t help but admire the audacity of taking up 13 years, 14 studios, and losing every member of your band in the creation of an album:

To [Axl Rose], the long march to Chinese Democracy was not about paranoia and control. It was about saying “I won’t” when everyone else insisted, “You must.” You may debate whether any rock record is worth that extreme self-indulgence. Actually, the most rock & roll thing about Chinese Democracy is he doesn’t care if you do.

Hmm, so by that measure, the Spruce Goose was pretty rock ‘n’ roll, too? The UK Guardian, perhaps by virtue of distance, has a little bit more sobriety on the topic, looking back at Chuck Klosterman’s 2006 spoof review of the album to observe that there’s no way any album that cost $13 million could ever be good enough. They struggle, perhaps in vain, to listen to the music “objectively,” and eventually discover that there are some “fabulous melodies” on songs like “Better” and “Madagascar”:

Listening to them, you’re struck by the thought that Chuck Klosterman might have been wrong. Chinese Democracy is clearly not the greatest rock album ever made, but nor is it an absolute and utter failure. The irony is, that for all the lavishing of money and time and technology, it’s saved by something as old fashioned as a good tune.

Sure, there’s some truth in all these reviews: bombast is, well, bombastic, and if you sing enough notes you’ll probably combine them in a pleasing way at some point. But what, for Gore’s sake, is this album’s carbon footprint? In an economy near collapse, do we want our rock bands burning through money like insurance execs on a bender? Guns N’ Roses are the GM of rock & roll, and observing that there are some nice melodies on Chinese Democracy is like saying the Hummer has well-designed cupholders. Like our mismanaged automakers, G N’ R is a marauding dinosaur, consuming resources and manpower that could support 10,000 better bands. The economy might take a hit, but a bailout–or even $11.99 on a CD–just rewards stupidity.