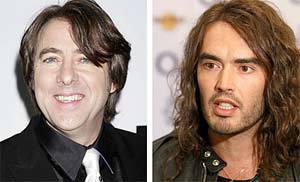 Anglophiles out there may have already been watching this saga unfold with amusement (as we sip our tea), but it’s finally reached the hallowed pages of the New York Times, so here’s the story for the uninitiated. British comedian Russell Brand (far right), known to US audiences as a recent host of the MTV Video Music Awards, has a weekly show on BBC Radio 2 every Saturday night. On the October 18th episode, Brand and guest Jonathan Ross (near right) left multiple “lewd” messages on the answering machine of Andrew Sachs, the actor who played Manuel on Fawlty Towers, after being unable to reach Sachs for a pre-scheduled interview. Part of the messages’ gist was that Brand had had an affair with Sachs’ granddaughter, Georgina Baillie. While only a few complaints were received after the initial broadcast, The Mail on Sunday took notice eight days later, writing an article and a commentary piece calling the show “verbal sewage.” Complaints skyrocketed, reaching nearly 40,000 within a week, and even Prime Minister Gordon Brown jumped in the fray, saying the episode was “unacceptable.” The fallout was severe: Brand was suspended and then quit, Ross was suspended from his popular Friday night television show for three months, and two BBC executives resigned. So, what the heck did they say?

The Times didn’t think it was very funny at all, and took every opportunity in the article to stick it to the two comedians. The calls, said the Times, “were not what most people would consider totally hilarious, or even mildly amusing.” There’s a furor, they wrote, over the “talent, or lack of it, of highly paid BBC entertainers.” Ross is “generally beloved” in the UK, “despite the fact that many people apparently do not find him funny.” They were “egging each other on like children.” Jeez, NYT, who are you trying to impress, the Queen?

Granted, I’m a big fan of bawdy comedy and snarky radio shows like Howard Stern, but I thought the bit was, if not totally hilarious, at least mostly hilarious, and moreover, pretty tame by US standards. The transcript is available at the UK Telegraph here, or you can listen to the bit below (although the transcript is easier to follow–those Brits sure talk fast). Sure, there are fleeting lewd references, but most of the humor seems to be about their bumbling and ridiculous overreactions to those moments. And remember, this is the “answerphone” of Manuel from Fawlty Towers, the randomness of which fact makes the whole thing even sillier. I can see why he’d be a little upset, but he was scheduled to call in anyway, wasn’t he? Okay, come to think of it, they did cross the line, but I’ve got to admit I did have a bit of a giggle. As to the question of whether the British public should be paying for all this with their £139.50 annual license fees, you lot are going to have to work that out for yourselves.