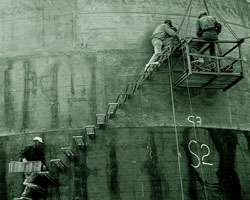 In the history of the Iraq War, one name is perhaps synonymous with the collapse of the Bush administration’s hopes for a post-Saddam world: Retired Lt. General Jay M. Garner. It was Garner who served as the first post-war administrator for Iraq, running the country during the fateful two months immediately following the invasion before being replaced by L. Paul Bremer III.

However, Garner’s frustrating tenure in Iraq wasn’t entirely wasted. This year, he and a small group of former US military leaders, officials, and lobbyists have quietly used their deep connections in Kurdistan to help Canadian companies access some of the region’s richest oil fields.

Though Garner’s involvement in these deals has, so far, remained under the US media’s radar, the situation presents an embarrassment for the Bush administration. US policy holds that foreign companies should not jump into the Iraqi oil business until after Iraqis figure out how to apportion their petroleum between various regions and the central government. In fact, last year, an American company named Hunt Oil triggered a controversy when it signed a deal to produce oil in the area of Dahuk in Kurdistan. Hunt Oil’s CEO is a friend of President Bush and a former member of his Foreign Intelligence Advisory Board; congressional investigators discovered that even though the State Department eventually condemned the contract, the administration had long known about the deal and elected not to intervene. Garner has so far evaded a similar outcry because he’s acting on behalf of companies in Canada.

But Garner’s deal-making is not without risks. In the spring of 2007, Iraq’s cabinet began working on an oil law to govern the country’s oil reserves, which are the third largest in the world. Ever since then, however, Iraq’s Sunni, Shiite, and Kurdish factions have been locked in a contentious struggle over the proposal. According to several observers, including a State Department official familiar with the matter, Garner’s efforts to help his Canadian employers preempt the oil law have undermined the already fragile possibility of a cohesive Iraq—which was, of course, what Garner was originally sent to Iraq in 2003 to achieve. Referring to Garner and his colleagues, the official says, “It’s unfortunate that they are working for a company that is just adding fuel to the fire in disagreements between Baghdad and Erbil, but there’s not much we can do about it.”

Garner calls this “a typical State Department response.” In his view, he’s simply helping the Kurdistan Regional Government, or KRG, to get back on its feet. “The State Department has forgotten the Kurds were our allies during the war, and the Arabs were not,” he says. The Bush administration, he says, should be encouraging the kind of contracts he’s facilitating: “If the State Department had any sense they would make the [KRG] the model and have the rest of Iraq follow that model,” he told me. “But our State Department is so inept that they’re incapable of doing something like that.”

Following the 1991 Gulf War, Jay Garner was charged with securing Kurdistan, and for some time he has belonged to a selective clique of American military figures and politicians friendly to Kurdish interests. He’s also not shy about leveraging his military credentials in the business world. After leaving the Army in 1997, he became, as The New York Times put it, a card-carrying member of the “iron web” of former military officials and defense contractors that “operates with very little public scrutiny and is saturated with conflicts of interest.” He took a leave from his job as the president of SYColeman, a defense firm that works on missile systems, to run the Iraqi reconstruction, but soon clashed with the Bush administration: Garner wanted quick elections so that Iraqi leaders could determine their own future, while the administration wanted to impose privatization of the country’s assets. Garner did share some common ground with the administration that dismissed him, though: Like the White House, he believed that “the only way to reconstruct the country was through [private] contractors.”

Garner’s Canadian work dates back to around 2006, when he discussed Kurdistan with Stan Bharti, CEO of a Toronto-based merchant bank called Forbes & Manhattan, which manages 20 Canadian mining, oil and homeland security companies. Garner told Mother Jones that he brought Bharti to Kurdistan a couple of times, and in October 2007, F&M announced its intention to invest $100 million in the region’s oil and gas sector by 2010. Garner became an adviser to F&M, along with retired Lt. General Ron Hite, a business partner of Garner’s who sits with him on at least six boards of security, defense, and technology firms. In June 2008, retired Lt. Colonel Richard Naab signed on as the Kurdistan operations vice president for an F&M oil and gas company called Vast Exploration. Naab had commanded US troops in northern Iraq beginning in 1991, and was swiftly tapped by Garner after the invasion in 2003. He effectively ran northern Iraq from 2003 to 2004.

In May 2008, Vast announced that it had signed a contract to develop oil in the Black Mountain block with the KRG, along with two other Canadian companies that belong to a consortium with Vast. Vast estimates that Black Mountain could yield up to 600 million barrels of oil, which could sell for $73 billion, depending on oil prices. In a conference call, Bharti described Black Mountain as “one of the largest blocks in Kurdistan” and added that Garner “was influential in introducing me to Kurdistan and the opportunity here.” In late 2007, Garner, Hite, and Naab were present during the signing of a Memorandum of Understanding in Kurdistan, to show their interest in competitively bidding for oil.

Following the Vast deal, Garner was named to the company’s board of directors; the company lists several more prominent figures, including Washington lobbyist Joe Reeder, an undersecretary of the Army under President Bill Clinton from 1993 to 1997, on its advisory board. Reeder says he has worked with Kurdistan “for the last two to three years.” In September 2007 his law firm, Greenberg Traurig, (the former home of disgraced lobbyist Jack Abramoff), signed a one-year contract with the KRG worth $480,000 “to promote awareness and understanding of Kurdish interests.” Reeder insists that in doing business with Vast, “the KRG has been assiduously proper with regard to the hydrocarbon laws of Iraq,” and is in “complete compliance” with the 2005 Iraqi Constitution.

Unfortunately, the legal situation isn’t that simple. When the Iraqi constitution was written, the sections relating to oil were, predictably, some of the most hotly contested, and they remain riddled with ambiguities. The Kurds successfully pushed for language limiting the central government’s authority to current oil fields, as opposed to as-yet-unexplored ones. It’s also unclear who has the power to actually award contracts; that was one of the matters left for the long-awaited oil law. Now, as a State Department legal adviser who worked on the draft told me, the ambiguities have “come home to roost.”

What is clear is that each move by foreign companies into Kurdistan adds fresh discord to Iraq’s volatile debate over federalism and oil. A poll released in August 2007 by a Washington, DC-based consulting firm found that more than 60 percent of Iraqis want their oil to be developed by the Iraqi state rather than foreign companies. More than 70 percent complained about a lack of transparency where proposed oil laws are concerned.

Baghdad has denounced most of the oil contracts signed by the KRG as “illegal,” and has blacklisted the companies involved from future bids. In September, Iraq’s oil minister, Hussein al-Shahristani, threatened that the oil law might never pass if Kurdistan doesn’t cancel the contracts.

A stalemate on the oil law could be disastrous—not least for the Bush administration. That’s why, the State Department official told me, Washington’s policy is plain: “We do not support any company signing a deal before an oil law is in place.”

Canada’s government, however, holds no such policy—and F&M has been one of the main beneficiaries of the position. In 2003, Pierre Pettigrew, the then-minister of international trade for the Liberal administration, informed business leaders that “As the infrastructure and governance issues are resolved, there should be no impediments to full participation by Canadian enterprises in Iraq.” (Mother Jones obtained Pettigrew’s letter through Canada’s Access to Information law.) By 2005, Pettigrew was minister of foreign affairs, and the US State Department upbraided him for pushing for Canadian investment in Kurdistan (especially a deal between the KRG and a Canadian company called Heritage Oil), saying, “You need to inform your companies [about] the problems this is causing,” according to the State Department official. Pettigrew left government in 2006 and joined F&M as an adviser. He is now an adviser for Vast and is also involved with other F&M member companies. The KRG has signed more than 20 oil deals with foreign firms; eight Canadian companies have stakes in at least six of those deals.

As for Garner, the success of the Vast deal has evidently encouraged him and his associates to pursue more opportunities in Iraq. He and Hite are on the board of Eurocontrol, a company that designs oil theft technology. Eurocontrol’s CEO, Bruce Rowlands, says
the company is exploring opportunities in Iraq, and that Garner and Hite are helping to facilitate contracts there. Garner and Hite’s ability to interpret Iraq’s “political sub-plots” and their understanding of the “U.S. industrial military complex” is, Rowlands says, “invaluable.”