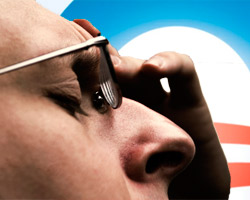 Democrats are notoriously skittish. Conditioned by decades of underperformance in presidential elections, where they have secured just three victories in the 40 years since Richard Nixon first won the White House, and in Congress, where the Dems have only recently recovered from their crushing 1994 defeat, Democrats are like the metaphorical field mouse, constantly spooked at the first bit of bad news.

The Obama campaign appears to be an exception to that trend. It has inspired more than just hope — it has inspired confidence. So much so that national polls show that wide margins of Democrats and Republicans alike assume Obama will win the presidency. In fact, the Obama campaign has released a video warning supporters of the dangers of over-confidence.

But as Election Day nears, it’s likely you know anxious Democrats who just can’t help themselves. Four things cause worry.

(1) The Bradley Effect, the phenomenon in which African-American politicians perform worse on Election Day than their poll numbers would indicate, supposedly because some voters support black candidates in conversations with pollsters but release their hidden racism when in the private confines of the voting booth.

Polling experts debate whether such a phenomenon even exists. But if it does, it may not effect this particular election. First, there are plenty of reasons for a voter to support McCain over Obama. A racist voter queried by a pollster doesn’t have to claim to support Obama, only to pull the lever for McCain. He or she can point to Obama’s stance on the war, his supposedly redistributionist tendencies, his lack of executive experience, or his past associations. Besides, there was no consistent evidence of the Bradley Effect taking place in the primaries. Obama outperformed last-minute polls by about 3 points on average.

(2) Obama doesn’t do well with late-deciders. In the primaries, exit polls routinely showed that the small percentage of voters who made up their minds in the final few days of a Democratic primary voted for Clinton. This may have been because they didn’t feel comfortable voting for the candidate with the thinner resume. It may have been something darker. But while this phenomenon may still occur, voters have had substantially more time to get to know Obama since the primaries. Obama has blanketed the airwaves since then and polling shows voters have come to trust Obama on both major challenges the next president will face: the war in Iraq and the economy.

(3) The GOP has a vaunted get-out-the-vote machine that dominates the final 72 hours of any campaign. It’s true that a superior GOTV operation pulled Bush over the finish line in 2004 — he was leading by 1 percent in polls before the election and beat Kerry by 3 percent. But this year, excitement among the conservative base is dampened and GOTV architect Karl Rove isn’t in the Republican candidate’s corner. And the Obama GOTV operation appears unparalleled by anything in American history — if there is any side that is going to be helped by its organization on the ground this year, it’s Obama’s.

(4) The polls are supposedly tightening. A Fox poll has Obama up just three points nationally. Two Pennsylvania polls show the race growing closer in that state; one polls shows the same in Virginia. The McCain campaign claims its internals show a surge in Iowa. Freak out?

No, hold on. The truth is murkier. Yes, the polls have tightened in Pennsylvania — a double-digit Obama lead is now a seven-point Obama lead. That’s hardly a number that strikes fear in campaign manager David Plouffe’s number-loving heart. The western swing states — Nevada, Colorado, and New Mexico — show no signs of narrowing. Arizona is getting tighter, but because McCain leads there the closing of the gap is good news for Obama. Ohio shows little danger for Obama.

Things aren’t uniformly good for Obama. North Carolina, which saw consistent Obama leads in the mid-single digits two weeks ago, now shows a dead heat. Three recent polls show a McCain lead in Missouri. Obama has had trouble getting above +2 in Florida, but his lead in the Sunshine State has never been consistently larger than that.

And that Fox poll that says McCain is drawing even in the national polling? The network drastically reshaped its sampling to create that effect.

There are strong reasons for Obama supporters not to worry:

(1) The make-history effect. We’ve pointed to a story from early voting in Cincinnati that illustrates this. If voters believe Obama is going to win, they may not want to have to tell their grandchildren that they voted against America’s first black president.

Unfortunately, that doesn’t explain why the pollsters that do include cell phones consistently produce numbers that favor Obama more heavily. If young people vote in large margins, they may add a couple points to Obama’s column that (many) pollsters have missed.

(3) Obama is playing on an expanded map. This is the ultimate reason why Obama supporters should take a deep breath and plan where to get their celebratory adult beverages for Tuesday night. Visit www.270towin.com and play around with their electoral college map. Give Obama all the Kerry states — which are all states Obama is leading comfortably in, including Pennsylvania. Don’t give him Ohio, Florida, Virginia, or Iowa, all states he could win on Tuesday. Now just add the three western swing states — Nevada, New Mexico, and Colorado — where he holds leads of seven or more points. Presto, election over. Obama gets 271 electoral votes, one more than he needs to win.

The possibility of Obama winning a decisive, nationwide victory may have dwindled somewhat in the last few days. But Democrats need to get their internal pessimists under control. The McCain side has far more to worry about at this late juncture.