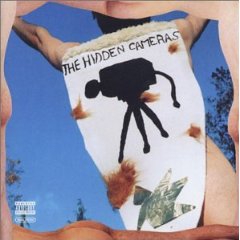 Like Jonathan, I’m profoundly disappointed about the apparent passage of California’s Proposition 8. While he managed to look to the future, reminding us that this is a battle we’ll eventually win, I’m ticked off right now, sick of having nuptials dangled in our face only to be snatched away again, pissed off that people get to vote on this. My fellow angry queers and sympathetic straights are already proposing a radical solution: ban marriage entirely. That seems like a fine idea to me–plus, if the movement takes off, we’ll have a theme song all ready to go! Back in 2003, Canadian combo The Hidden Cameras released a wildly underappreciated album called The Smell of Our Own. The music was a celebratory cross between the Polyphonic Spree, the Magnetic Fields, and Neutral Milk Hotel, but lyrically, they crossed even more boundaries, refusing to hide their sexuality behind coy double-entendres or bland generalities. The song “Ban Marriage” whips the musicians into an uptempo frenzy, but the lyrics are complex, with the protagonist’s wedding to another man disrupted by cries “to let coupledom die.” Is it an anti-assimilation tirade in defense of promiscuity, a dream of equality, or an expression of hopeless isolation? Whatever it really means, it’s great, and its joyous three-chord pattern is helping calm my fury. But you breeders aren’t getting any more wedding presents from me until we get this shit worked out, I’ll tell you that right now.

Video of a live show after the jump.