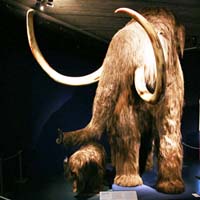 Have scientists learned nothing from Jurassic Park? A group of genomicists from Pennsylvania State University published research on their experimental procedure that’s decoded “a large fraction of the mammoth genome,” reports the New York Times. The procedure uses two $500,000 machines to extract genome information from mammoth hair.

Though there is not enough of the genome to totally recreate a mammoth from scratch, the scientists say they could use an elephant cell as a base and then alter it to be more like a mammoths. That cell could then be turned into an embryo and gestated by an elephant and eventually, presumably, born. In another, similar development a few weeks ago, Japanese scientists produced clones from mice that had been dead and frozen for 16 years. The resulting cloned mice survived to adulthood.

Personally, I love the idea of being able to see a real-life mammoth, or some version of it, one day. But it seems a bit silly to work on resurrecting an Ice Age mammal when a quarter of living mammals on this increasingly hot planet are going extinct right now.

Also, I’m not sure I like the idea of scientists playing around with genetics of extinct animals because we don’t really know what would result. Mammoths are fine, but what about saber-tooth tigers? As Steven Spielberg illustrated (albeit, using almost impossible science) in Jurassic Park, when you play with nature, you’re never totally in control. I’m not saying in 10 years we’ll all be running through the jungle hiding from Megistotheriums. I’m just saying nature has its own ways, its own logic, and we may never understand the full complexity of the biochemical processes that turn an egg into an embryo, much less a mutant egg spliced with extinct DNA.

For my money, I’d much rather spend $500,000 on saving the polar bears, or at least their genome, than resurrecting extinct giants.