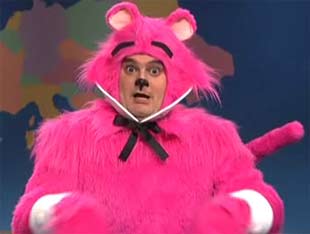 Not to be all-Prop-8-all-the-time over here on the Riff, but there was some surprising, funny, and surprisingly funny stuff on SNL Saturday night, and some of the best bits seemed to be inspired by the sudden re-emergence of gay rights as a newsy topic. In fact, homosexuality was pretty much the running theme of the whole episode, from the overly-kissy family opening sketch (which culminated in a jaw-dislocating open-mouth snog between Andy Samberg and Fred Armisen) to the baffling-but-hilarious digital short featuring Samberg and host Paul Rudd painting each other’s naked portraits, Titanic-style. Justin Timberlake’s lispy cameo as one of three terrible male dancers in leotards in a Beyonce video also might count. By the way, somebody give Justin Timberlake a variety show—his two-minute version of himself hosting the show was pretty mind-blowing.

After the jump: Heavens to Murgatroyd!

There were two bits that were both hilarious and oddly heartwarming. First, when Weekend Update host Seth Meyers started to introduce a segment by announcing Prop 8’s passage in California, the audience erupted in loud boos. It was an amazing, unusual moment, and Meyers was clearly taken aback, responding with an “okay, vote’s over, thank you.” The bit he was introducing turned out to be awesome: a response to Prop 8 by none other than Snagglepuss, the overdramatic pink cartoon lion who, in retrospect, seems profoundly, obviously gay.

The second bit featured two parking lot attendants in a typical setup: they appear at first to be typical homophobes, until their dialogue turns more homoerotic than homophobic. What made the sketch oddly touching was that they took it to the next level, with one of the parking attendants finally asking the other for his hand in marriage. By the end, you could almost believe these two, with their goofball banter about gay stuff being “hilarious,” might actually be in love. (Still searching for video on that one).

Sure, some thought the episode seemed to fall into the “over-the-top I Now Pronounce You Chuck & Larry brand of gay,” meaning, I guess, an attempt at enlightened comedy that only ends up reinforcing stereotypes. Sure, Samberg’s digital shorts get their chuckles at least in part from homoeroticism at least 60% of the time, and it would be nice if the cast had any openly gay performers–where have you been, Terry Sweeney? The episode was also a sausage fest, with few major roles for the show’s talented women–Prop 8 banned lesbian marriage too, you know. But while the comedy often aimed for absurdity or adolescent giggles, it never struck me as offensive. On the contrary, it seems like more evidence of an emerging trend, that Prop 8 and its ilk have finally woken up the queers and friends-of-queers, and that while the Mormons may have won a battle, they got way more than they bargained for.