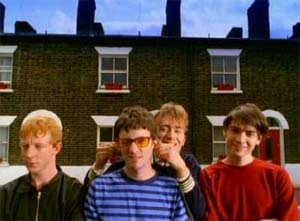 While I was over looking at NME’s Top 10 Singles of 2008, I noticed another screaming headline, pictured on the cover of the new issue: BLUR REUNITED! For the uninitiated, the legendary London four-piece lost guitarist Graham Coxon in 2002 after he got really annoyed during the recording of their last album. Lead singer Damon Albarn went on to wild critical and commercial success with Gorillaz and The Good, The Bad and The Queen, so he’s not exactly hurting for cash, but he and Coxon have apparently buried the hatchet (hooray!) so the reunited band can play some gigs in 2009:

“It just felt it was right again,” declared Albarn of Blur’s return. “It somehow feels like there’s something for us to do again, we’re not completely useless or pointless, we’ve got a reason to exist.” Coxon agreed, explaining the band were “making public what’s been going on a little bit privately. For the benefit of the fans and those interested we can say that something’s on the cards.”

A single show is currently planned at London’s Hyde Park on July 3rd, and an appearance at Glastonbury is rumored. Hey, howabout Coachella?

With a little distance from Blur’s 13-year lifespan, it’s all the more apparent what an interesting, strange band they were. At the time, 1991’s Leisure seemed like a thin copy of the typical shoegaze/baggy sound of the day (“There’s No Other Way” can be mixed right into The Farm’s “Groovy Train”!), but in retrospect, the couple good singles portend great things to come. “Sing” was a surprisingly affecting, piano-led track that gained fame when it ended up on the Trainspotting soundtrack five years later. There’s no video but you can listen to the song below.

1993’s Modern Life is Rubbish came as a shock to critics and fans alike. Leisure had pigeonholed the band into a trendy scene, and after a disastrous American tour (we were all into grunge at the time), the band found they were deep in debt. A reinvention was in order, but no-one realized quite how successful the new Blur would be. The album’s pastiche of classic British styles from The Kinks to music-hall ended up basically launching the very idea of Britpop, a cultural hurricane that dominated the 90s. “Chemical World,” with its cheeky story-time lyrics about dirty secrets behind the suburban British façade, exemplified the band’s new direction:

The years from 1993-1997 were an extraordinary creative peak from the band. They turned around a new album, Parklife, in record time, releasing it in April of ’94 to critical acclaim and massive sales , debuting at #1 on the British charts. A winking jaunt through the history of British music, each song on Parklife celebrates a certain style or era–cheesy synth pop, punk rock, psychedelia–while lyrically illustrating the ironies of mid-90s British life in a way everyone could sing along to. “Girls and Boys,” for instance, was just as great a commercial success as the Duran Duran-style electro-pop it so perfectly aped. But it’s the title track’s swinging rhythm and wandering tales of having tea and feeding pigeons that epitomizes the Brit-centric style:

Barely another year passed before Blur released another album, The Great Escape, also debuting at #1 in the UK. With the same jaunty melodies as Parklife, Escape sees darker lyrical themes creeping in around the edges, focusing on the bleak British suburbia (remember, their suburbs are like our projects). “Country House” and “Charmless Man” were hits, but “The Universal” was a masterpiece, a strangely-structured ballad with soaring strings and a gut-wrenching lyrical disillusionment:

As Britpop wound down, Blur again reinvented themselves, ironically turning towards the American sounds they had earlier rejected. Their 1997 self-titled album abandoned lyric sheets and swingy pop for the guitar experimentalism of Sonic Youth, even bringing in Thurston Moore to help produce an 11-minute track. Like they had done earlier with “Girls & Boys,” the band again aped a style so perfectly that they convinced a nation they were the real deal, and “Song 2” became a massive smash in America, where you can still get a crowd to scream “woo-hoo” if you play it at a club, 10 years later. But it was “Beetlebum,” with its Fab Four-reminiscent melodies (and Oasis-style grand outro) that was the album’s most affecting track:

By 1999, the band were running out of steam: Albarn’s breakup with girlfriend Justine Frischmann of Elastica seemed to symbolize the end of Britpop, and 13 is filled with songs that wallow in heartache, like the disappointing “Tender.” But there were bright moments as well, especially “Coffee & TV,” a melancholy throwback to the band’s earlier Britpop style. It’s similar in tone to The Smiths’ “Stop Me If You Think You’ve Heard This One Before,” a song that seems more like a reminder of good songs than a good song itself. The quirky video, starring a plucky milk carton, brought it to a wider audience:

The less said about 2003’s sloppy Think Tank, the better; while Pitchfork gave it 9.0 out of 10 hipster bonus points, the album is a mess; Fatboy Slim came on board to produce two tracks, which supposedly was the last straw for a dissatisfied Coxon, who left the band before the album’s completion. Will Blur be able to recapture their glory days, or even a smidgen of the magic of Albarn’s genre-smashing post-Blur projects? Stay tuned.