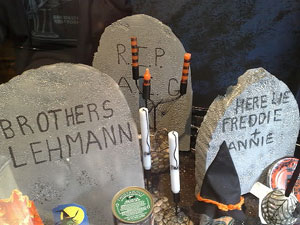 Congressional Republicans finally got their big chance to blame the financial crisis on the Democrats. Ever since the House Committee on Oversight and Government Reform began investigating the causes of the nation’s current economic troubles in early October, the panel’s Republican members have been agitating for a hearing on Fannie Mae and Freddie Mac. They charged that their Democratic colleagues failed to rein in the two government sponsored enterprises (GSEs), which were placed in receivership in September, frequently noting that Democrats had accepted significant campaign contributions from the companies. (Republican members of the committee also took in their fair share.) Many GOPers blame the financial crisis on the extension of mortgages to poor people and minorities who couldn’t afford them, which they say was facilitated by lax oversight of Fannie and Freddie. On Tuesday, with the presidential election safely over, committee chairman Henry Waxman (D-Calif.) gave the GOP members their hearing.

Blaming Fannie and Freddie for America’s economic troubles has been a key GOP talking point. During his run for the Presidency, John McCain said the GSE’s were “the catalysts, the match that started this forest fire.” At Tuesday’s hearing, Rep. John Mica (R-Fla.) was eagerly promoted this narrative. During his questioning of the four former Fannie and Freddie CEO’s who had been called to testify, Mica said committee Democrats “tried to lead the public” to believe the financial mess “is Wall Street’s fault.” Objecting to this interpretation, Mica offered a “different take on this.” He went on to quote from an editorial in the sometimes comically right-wing Investor’s Business Daily:

Fannie and Freddie, the main vehicle for Clinton’s multicultural housing policy, drove the explosion of the subprime housing market by buying up literally hundreds of billions of dollars in substandard loans—funding loans that ordinarily wouldn’t have been made based on such time-honored notions as putting money down, having sufficient income, and maintaining a payment record indicating creditworthiness…This created the problem we are having today.

But there’s a problem with Mica’s (and IBD’s) explanation. The “multicultural housing policy” the editorial refers to is the 1977 Community Reinvestment Act, which encouraged the extension of credit to poor people and minorities. Conservatives—like the writers of the IBD editorial—say the CRA “led to a reckless surge in mortgage lending that has pushed our financial system to the brink of chaos.” But the vast majority of subprime loans were made by institutions that were not subject to the CRA, and studies have shown that the act has actually increased the amount of responsible lending to poor families. The comptroller of the currency, conservative economist and Fed governor Randall Kroszner, as well as Fed chair Ben Bernanke, have all said the CRA is definitively not to blame for the current crisis.

But just because the CRA and its poor and minority beneficiaries didn’t cause the meltdown doesn’t mean Fannie and Freddie don’t share part of the blame. Wall Street created the secondary mortgage market, packaging, repackaging, and reselling mortgages and parts of mortgages. So in June 2005, as securities backed by subprime loans became an increasingly large percentage of the mortgage market, Fannie and Freddie executives were faced with a choice. They could stick with the secure, fixed rate mortgages that they were chartered to hold. Or they could move into the subprime market, where, as one confidential presentation to Fannie Mae CEO Daniel Mudd put it, the real “revenue opportunity” was. In the presentation, Mudd was told his corporation could “stay the course” or “meet the market where the market is.” Mudd and then-Freddie Mac CEO Richard Syron ignored warnings from risk managers in their own companies and moved into subprime. And, instead of staying the course, they drove their companies off a cliff.

Despite the fact that the companies had to be rescued, the Fannie and Freddie CEOs defended their disastrous decision to expose their companies to the subprime market, claiming they had to “follow the market” when banks and other investors moved increasingly to subprime. “Fannie Mae did not cause the current crisis,” said Franklin Raines, who was CEO of Fannie Mae from 1999 to 2004. “If anything, Fannie Mae played catch-up to the banks and investment banks who drove the securitization of the most toxic subprime mortgages.” Raines’ defense was typical of all four CEOs, and Waxman echoed it. “It is a myth to say they were the originators of the subprime crisis,” he said. “Fundamentally, they were following the market, not leading it.”

Following instead of leading, however, does not absolve the companies or their CEOs of responsibility for their actions. Both companies were warned by their risk officers that buying “no income, no assets” or NINA loans and other subprime products was irresponsible and foolhardy. Freddie Mac fired its chief risk officer. Fannie Mae simply ignored its risk officer. Instead of heeding the warning, both companies continued to invest in subprime loans, and documents released at the hearing show that as late as 2007 Fannie Mae executives were talking about wanting to go “down the credit spectrum.” By increasing the demand for products that turned out to be fundamentally worthless, Fannie and Freddie made the problem worse, and now, as Waxman emphasized, “their irresponsible decisions are…costing the taxpayers billions of dollars.”

Congress certainly deserves some of the blame, too, as Rep. Darrell Issa (R-Calif.), soon to be the committee’s ranking Republican, pointed out. “We have to recognize that what we’ve done with the GSE’s hasn’t worked,” Issa said. “We in the Congress have to look in the mirror, because part of the blame is on our doorstep.” But perhaps it’s not as simple as assigning blame to any one group or entity. There’s plenty of blame to go around. Rep. Elijah Cummings (D-Md.), emphasized that point when he read part of a Thomas Friedman column from late November:

Sure, Fannie and Freddie had no business buying up subprime mortgages so that they could take advantage of a “revenue opportunity.” But a lot of other people didn’t have any business doing what they were doing: the hedge funds that went for so long without regulation, the federal regulators who turned a blind eye, the credit rating agencies who got paid to say crap was gold, the companies like AIG that took obscene risks on complicated credit instruments, the investment banks like Lehman Brothers that facilitated all the irresponsible transactions. Since October, they’ve all been called before the House oversight committee to be held to account. Just like the Fannie and Freddie CEOs who testified today, they all said, “it’s not my fault. No one could have seen this coming.” Mark Souder, a Republican from Indiana, summarized the problems with holding hearings on the financial crisis best. “Nobody takes responsibility for anything,” he said. “It gets very frustrating to figure out what to do next if nobody’s responsible for anything.”