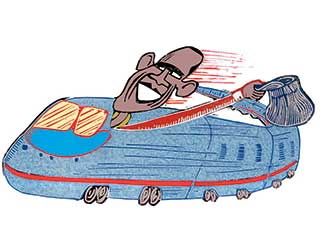 president barack obama (how sweet those words) has already transformed American politics. The gop is in crack-up. Obama’s coattails in Congress give him leverage, and his vast public support gives him power. There is an economic crisis and a demand for action to deal with it. More than at any time since Ronald Reagan in 1981, what the president wants, he will get.

So, what should he ask for? How big and far reaching should changes to the economy be? Nearly everyone in Obama’s circle agrees that more public spending and tax cuts are needed: a “stimulus package.” The cautious say $150 billion (about 1 percent of gdp), while the bold and the worried say $500 billion (or just more than 3 percent of gdp). Both focus attention on what is needed in 2009—as if the economic problem can be solved in a year.

That is almost certainly wrong.

When the free fall began, Treasury Secretary Henry Paulson and Fed Chair Ben Bernanke argued that the problem with the economy was frozen credit. Banks were unable to lend, they said, because they could not get the funds. This was not true, as we discovered when Treasury gave the banks the funds, only to realize that banks had no wish to lend them out. Instead they used the money to build capital and on dividends and executive pay. (Goldman Sachs, which received $10 billion as part of the bailout, got good press when it announced its top seven execs would forgo their year-end bonuses. But a government ban on bonuses was likely coming, and by limiting the sacrifice to top managers, the company retains leeway to spend the estimated $6.9 billion set aside for bonuses on slightly lesser employees.)

In any case, banks did not wish to lend, and ordinary Americans, desperately cutting costs, did not wish to borrow, and with their homes underwater many had little collateral to borrow against.

What began as a housing collapse will not go away soon. Empty houses wreck home values for their neighbors. The ratings agencies are discredited, the investment banks are gone, and high finance is in debt deflation. Foreign investors won’t soon trust the market for US private debt, even for blue chip corporations, so long as they remain saddled with toxic health care costs. Regulation will have to be rebuilt. In short, the money wells have been poisoned, and it will take time and patient effort to clean them up.

The historical role of a stimulus is to kick things off, to grease the wheels of credit, to get things “moving again.” But the effect ends when the stimulus does, when the sugar shock wears off. Compulsive budget balancers who prescribe a “targeted and temporary” policy followed by long-term cuts to entitlements don’t understand the patient. This is a chronic illness. Swift action is definitely needed. But we also need recovery policies that will continue for years.

First, we must fix housing. We need, as in the 1930s, a Home Owners’ Loan Corporation to restructure failed mortgages on sustainable terms. The basic objective should be to keep people in their homes by all necessary means, except where borrowers committed willful fraud, so as to stop the spread of blight and decay. Government can use its power over banks to make this happen, as it has with IndyMac, the California bank that is now, as a federally owned company, revising unsustainable mortgages. But this is no small endeavor: The fdr-era holc operated for almost two decades and at its peak employed 20,000 people.

Second, we must backstop state and local governments with federal funds. Otherwise falling property (and other) tax revenues will implode their budgets, forcing destructive cuts in public services and layoffs for teachers, firefighters, and police. And when these public servants are laid off, guess what? They have trouble paying their mortgages. General revenue sharing—unrestricted federal grants to states and towns, a program invented by Richard Nixon and killed by Ronald Reagan—is required. Luckily it can be reintroduced quickly on a large scale.

Third, we should support the incomes of the elderly, whose nest eggs have been hit hard by the stock market collapse. We can’t erase those losses case by case (nor should we), but we can sustain the purchasing power of the group. The best way is to increase Social Security benefits. Useful steps would include boosting the formula for widowed spouses, ensuring a minimum benefit for retirees who worked their whole lives in low-wage jobs, and allowing college students to receive survivors’ benefits up until the age of 22. But let’s go further and raise benefits across the board, which has not been done for a generation. I’d say raise them 30 percent, and let the federal government make the contributions for five years. This would be good for the elderly, who could retire; good for working-age people, who would replace the retiring; and good for the economy, since people who need money spend it when they get it.

Fourth, we should cut taxes on working Americans. Obama proposes to effectively offset the first $500 of Social Security taxes with a refundable credit. It’s a good idea, but can be expanded. If the economy continues to spiral downward and a really large fiscal boost is needed, let’s declare a payroll tax holiday, funding Social Security and Medicare directly from the treasury, until the economy gets back on track. Workers would get an immediate 8.3 percent raise to help meet their mortgages; employers would have the same amount to spend on wages, job creation, or investment. (Not all efforts to jump-start the economy deliver so much bang for the buck. See chart below.)

Is this the standard “liberal line”—borrow and spend? No. It is the situation, not the philosophy, that demands this action both grand and sustained. Economic recovery in an existential crisis like this means actually building a new economy. For that, we need investment—to restore our roads, rails, transit, broadband, and water systems, to build parks and museums and libraries, to protect the environment. Right now, states and localities can’t borrow for these things. Creating a National Infrastructure Fund, using Uncle Sam’s borrowing power to put money where it’s needed, is one way forward. Federal capital spending should be bond financed and exempt from budget rules, especially pay-as-you-go. It makes no sense to finance projects whose benefits will last for 50 years solely from tax revenues of today.

Finally, we must change how we produce energy, how we consume it, and above all how much greenhouse gas we emit. That’s a long-term proposition that will require research and reconstruction on a grand scale: support for universities, for national labs, for federal and state planning agencies, a new Department of Energy and Climate. It’s the project around which the economy of the next generation must be designed. It’s the key to future employment and future growth—and to our physical survival.

Energy transformation is key for another reason. Even during this crisis, the world has supported the dollar. Why? Because no alternative safe haven exists. Despite our faults, we have a well-designed economic system, the enduring fruit of the New Deal and Great Society. Thus Uncle Sam can borrow, at very low cost, whatever he needs—a terrific advantage over the competition. But in the long run, the world will support us only if we give something back. Ushering in new technologies that the rest of the world can adopt in order to save the planet is the right sort of gift. By helping to save the physical world, we may be able to save our currency, our credit, and our economy as well.

BANG FOR THE BUCK 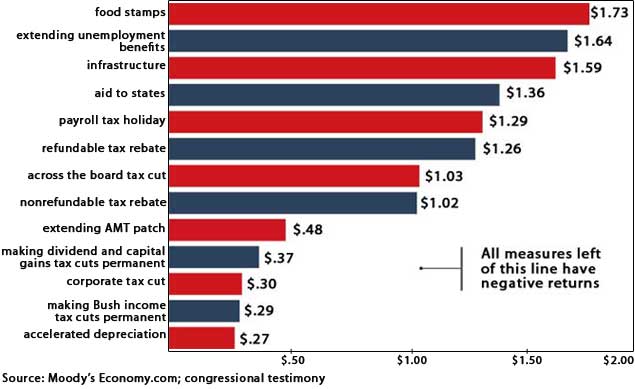