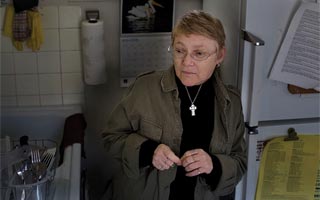 “I’ll take a sandwich to work and that’s about it,” says Aubretia Edick, who is 58 and works in the pharmacy department of a Wal-Mart in Hudson, New York. “I drink a lot of tea. Once in a blue moon I’ll go into Save-A-Lot and I’ll get some meat. Eggs is kinda like a luxury kind of thing.”

Edick first landed a $6.40-an-hour gig at Wal-Mart back in 2001, and over time her wages inched upward, reaching $10.50 last year. But with inflation factored in, it isn’t that much better than when she first started. To make matters worse, while Edick was technically full time, her manager often slashed her hours due to the slowing economy. In mid-2008, she was grossing roughly $297 a week—$195 after taxes and deductions.

It’s not just the unemployed who are hurting. Across the country, unskilled, nonunionized workers like Edick are barely scraping by on stagnant or declining wages. Bob Pollin, codirector of the Political Economy Research Institute at the University of Massachusetts, calculates that a single person needs about $400 a week, pretax, to achieve even a semblance of economic security—the ability to pay bills on time, eat three square meals a day, and set aside a small rainy-day fund. By Pollin’s calculation, tens of millions of American workers fall short of that minimum.

You’ll find many of them in food prep, where more than 11 million Americans command a median hourly wage of $8.24, according to the Bureau of Labor Statistics. There are another 4.5 million workers doing maintenance-related tasks for $10.18 an hour, 3.3 million in “personal care” at $9.50, and 14.5 million in retail jobs that pay $11.41. Last year, Wal-Mart said its employees averaged $10.83 an hour, although labor-activist group Wal-Mart Watch claims that many longtime workers still make less than $10. These meager wages have helped push 6.2 million more Americans into poverty between 2000 and 2007. And that was before the banking industry imploded.

The fallout can be seen in breadlines across the country. Dozens of food-pantry workers I’ve interviewed for my upcoming book on hunger report a flood of working-poor clients. Feeding America (formerly America’s Second Harvest), a nonprofit that supplies 63,000 pantries and once primarily served “the poorest of the poor,” learned in 2006 that more than one-third of its beneficiaries come from working households. “We’re seeing faces we’ve never seen before,” says spokesman Ross Fraser. At a pantry in Gallup, New Mexico, visited back when gas prices were soaring, one 29-year-old Navajo woman told me how the grueling drive to her 7-Eleven job in the town of Cuba came to burn up nearly half of her $6.80-per-hour take. In the end, the math didn’t make sense, so she quit. “I feed my three boys potatoes,” she said. “We eat two meals a day—just breakfast and dinner. Usually oatmeal for breakfast, and in the evening, gravy potatoes with tortillas.”

Edick’s monthly take-home pay—about $800 at the time I visited—doesn’t go far either. She lives in a tiny apartment with a broken stove and mostly empty fridge that barely works. Rent and utilities run about $450 a month; when it’s cold outside, she often sets the thermostat to 50 degrees to lower her bill. Gas and car insurance cost another $160 or so, depending on prices at the pump. And then there are the doctor visits, covered only after a $1,000 deductible—plus medicines for a thyroid problem, chronic anxiety, and osteoporosis.

To balance the budget, Edick often skimps on food, some weeks spending little more than $10 on groceries, about one-quarter what the federal food stamp program calculates is needed for three “thrifty meals” a day. She patronizes the grimy discount stores whose prices run even lower than Wal-Mart’s, and can tick off their notable sales going back for months. “I had some oranges,” she recalls with a self-deprecating smile. “A couple of months ago, they had grapes on sale.” And, “If it’s less than three dollars for a package of six steaks, that looks like a good deal to me.” (She tries not to think too hard about the quality of a 50-cent steak.) Her staples include PB&J, canned ham salad, soup: “I’ll get chicken noodle or Campbell’s Chunky. There’s meat in there. You can pour it over noodles and put butter on it. It’s like a delicacy.”

In essence, the nation’s biggest employers of unskilled labor often leave workers having to feed from the public trough. In 2004, a year in which Wal-Mart reported $9.1 billion in profits, the retailer’s California employees collected $86 million in public assistance, according to researchers at the University of California-Berkeley. Other studies have revealed widespread use of publicly funded health care by Wal-Mart employees in numerous states. In 2004, Democratic staffers of the House education and workforce committee calculated that each 200-employee Wal-Mart store costs taxpayers an average of more than $400,000 a year, based on entitlements ranging from energy-assistance grants to Medicaid to food stamps to WIC—the federal program that provides food to low-income women with children.

For her part, Edick, unlike many Americans, hasn’t resorted to handouts. (An estimated 28 million people were on food stamps as of last April, up from 17 million in 2000.) “There’s times I’m hungry, and I’ll look in the refrigerator for something—I’ll find a snack pudding. Some leftover rice,” Edick says softly. “I’m not starving or anything like that.”

Sasha Abramsky’s new book, Breadline USA, is due out in May from PoliPoint Press.