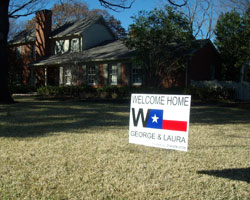 A few days after Christmas, while visiting family in Dallas, I was driving with my parents to dinner in their Lexus (bumper sticker: “Don’t Mess With Texas”). Along the way we passed an elementary school, which is just down the street from the ranch-style house at 10141 Daria Place that George and Laura Bush now call home. “Can you believe he put all those kids in danger?” my mom gasped. She fears Bush will be assassinated in a dirty bomb attack that will also incinerate the rest of the zip code.

I grew up (and my parents still live) six blocks from the former president’s future home in Preston Hollow. It’s a place New York Post gossip columnist Cindy Adams recently called “a town outside Dallas” where “houses come with horse stables, lake views, mountain views, golf club views.” (It’s actually a neighborhood inside Dallas that comes with none of those things.) Reporters have called it wealthy, white, and Republican, yet that hardly does it justice. My parents, both avid Democrats, probably have fewer Democratic friends in Preston Hollow than Bush’s 8,500-square-foot home has bathrooms.

Of course, Preston Hollow is not Highland Park, the ritzy, incorporated town in the middle of Dallas where the 113-year-old Dallas Country Club didn’t count a single African American member until 2007. But the neighborhood includes a small number of estates—huge spreads occupied by Texas Rangers owner Tom Hicks, H. Ross Perot, and oilman T. Boone Pickens, among others—that were once surrounded by a sprawl of postwar tract homes, many of which have since been razed and replaced by McMansions. Stuck into their green lawns are yard signs that say with proud intimacy, “Welcome Home, George and Laura.”

Though I could’ve guessed that Bush would be welcomed back (he also lived here before he was Texas governor), the warm reception brought back memories of the neighborhood’s other political signs.

My first inkling of Preston Hollow’s conservative ways came in the third grade, when I was riding home with a freckly, redheaded kid named Josh Music, whose mother was a member of my mother’s carpool group. At the time, Josh seemed especially cool and especially Texan because he’d run shirtless through a field of bluebonnets in a TV commercial for Blue Bell Ice Cream. When his mom randomly asked me which presidential candidate I liked, I said Mondale. “How could you vote for a woman for vice president?” Josh scolded. “If Mondale gets shot, a woman would be president!”

Preston Hollow now supports Sen. Kay Bailey Hutchison (R-Tex.), but racial politics remain more complex. Almost no African Americans live in my parents’ neighborhood, other than the family that recently took up residence in a gated castle just constructed across the street. It’s the home of Rayford Wilkins Jr., the CEO of AT&T. After he and his wife moved in last year, my mom enthusiastically knocked on their door with a plate of warm brownies and later offered to throw them a welcome-to-the-neighborhood party, adding proudly, “And we’ll celebrate the election of Obama!” The pretty and fashionable Mrs. Wilkins stared back blankly. My mom briefly entertained the notion that Mrs. Wilkins had misconstrued the brownies as a racial slight, but campaign filings confirm her other guess: that Mr. Wilkins backed McCain.

Unlike the Wilkins’ palatial home, with its gurgling fountain and scalloped facade of Austin stone, Bush’s new pad looks surprisingly demure; from the street its squat brick exterior seems as old as the neighborhood. My parents don’t appear to buy the idea that a man of such unsubtle politics could possess subtle tastes. “I wonder if he’s going to tear it down,” my mom said.

Others wonder if Bush is taking a cue from Ross Perot. Though Perot lives catty-corner to my parents in a huge estate, the billionaire is famous in Preston Hollow for his humble trappings. On Christmas Day, for example, we were walking the family golden retriever in the neighborhood when he slowly drove himself past in a nondescript Ford Crown Victoria. (The last encounter between Perot and our dogs was during his 1992 presidential race, when Perot’s security guard called to say that they’d broken into the billionaire’s yard and were chasing his swans. My mom apologized and offered to pick them up. “That won’t be possible,” said the guard, who walked them over instead.)

Bush, like Perot, also wants privacy. His home backs up to Hicks’, where, the theory goes, the ex-prez will use the helipad the Rangers owner plans to build. He’s also petitioned the Dallas City Council to allow him to cordon off Daria Place with a security gate. (The petition was granted.) In the 5th grade I rode my bike down this same street each day to reach my friend Kevin Portnoy’s house and then pedaled with him to our middle school, St. Mark’s (brother school to Hockaday, the all-girls private school attended by my sisters and Bush’s two daughters). Bush’s gate will make this same journey akin to entering the Green Zone.

Behind their own gate of anonymity, the Hockaday moms have plenty of quibbles with George and Laura. One time, Bush barreled down a narrow road in his Suburban and didn’t yield to one of them, which would have been the neighborly thing to do. Another one voted for Perot instead of George H.W. Bush, prompting Laura, she believes, to stop talking to her. And Laura didn’t invite one Democratic mom to the White House, but invited everyone else on her street (all presumably Republicans). Still, the same mom fondly recalls the time Bush threw a neighborhood Halloween party and the Secret Service—then protecting members of the Bush clan while H.W. served his term in office—took all the kids trick-or-treating.

Bush’s new neighbors are still coming to terms with their vaunted status. Over the holidays some 300 cars were passing through Bush’s cul-de-sac each day. “It was like a star was over his house,” said a man who lives in the home that used to belong to my friend Kevin’s family and declined to give his name. He expressed no political opinions about his new neighbor—”We’re all just people,” his wife said—but sent me a few doors down to meet the creator of the “Welcome Home” signs. Eighteen-year-old Ryan Bibb, an avid Republican, is selling them for $2 each to help raise money for his brother’s college education. (A portion will also go in Laura’s name to the library of the nearby elementary school.) “A lot of the [high school] kids weren’t too psyched about” Bush’s arrival, Bibb told me as we stood on his front porch, but Bibb himself was ecstatic: “Maybe he can help improve some of the [neighborhood] roads. I’m not saying it’s dumpy, but clean it up a little.”

Like Bibb, I first became acquainted with political signs in high school through unusual circumstances. My parents’ placards for Ann Richards, Bill Clinton, and various Democratic city candidates were always getting stolen. One night a friend and I decided that the only solution was asymmetrical warfare. We yanked every Republican political sign in a five-block radius. Eventually, our Suburban was pulled over by a policeman, who looked at the muddy signs in the back and accused us of stealing them. I told him my dad was a big-time Republican. One glance at the street name on my license, and he let us go.

Crime is rare in my parents’ neighborhood, but their house appears to be the exception. From hard experience, they’ve learned that their “Don’t Mess With Texas” bumper sticker, which is actually the state’s anti-littering slogan, is the only progressive political message the neighborhood is guaranteed to tolerate. After my mom affixed her old LS400 with a sticker depicting the Earth and the words “Love Your Mother,” it was keyed. When she drove a minivan with a pro-choice sticker in the early ’90s, she was followed home a few days before the van’s tire was slashed and our home’s front door was charred by a smoke bomb. (The same thing happened to a friend who also paraded a pro-choice sticker.)

Earlier this month, two men dressed entirely in black rang the doorbell incessantly and pounded on my parents’ front door at 11:30 p.m. for no apparent reason. When my mom peered out a side window, she saw them marching up the street, military style, until a compact car drove by and picked them up. She wondered if this Mother Jones story was the cause and called me to ask if it had gone online.

The next day a policeman told my mom that he doubted the men in black were connected to Bush’s move to Daria Place. But he added that the president’s relocation is only temporary. Bush plans to eventually move just across the street from her, into a walled estate near Perot’s property, the officer said. This tidbit of unsubstantiated cop gossip has sent my mom into a new fit of hand-wringing about the threat of nuclear fallout. “If someone drops a dirty bomb, I’m dead,” she told me recently. I kind of see her point: If people in Dallas react violently to the moderate-left views of my parents, who’ve never even held elected office, what will the rest of the world do to the man who gave us the Iraq War, Gitmo, and warrantless wiretapping?

Maybe my parents and the Bushes should commiserate in their shared adversity. My mom could take some brownies over and tell them to be brave. And then she might offer the former first family the same wisdom she offered me when I asked how she and my dad manage to put up with all the Democrat-haters. “I always laugh—we should have moved to California or Massachusetts a long time ago,” she told me. (For Bush’s scenario, she could substitute “Waco” or “Antarctica” here.) “But it’s kind of fun to be different. You really have to work to stand up for what you believe in. Who knows? In California, it might just be too easy.”