Ah, the use of front groups by the Big Business lobby. Always so much fun. Here’s the latest example, spotted by the Center for Responsive Politics’ Public Integrity’s blog, PaperTrail, when it investigated this online advertisement against Labor Secretary-designate Hilda Solis: 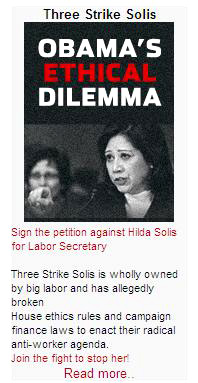 Clicking on the ad takes you to a petition against Rep. Solis’ nomination, which is hosted on the website of “Americans for Job Security.” While it’s hard to find anyone these days who would be against job security, the claim that Solis is “anti-worker” doesn’t seem to jibe with endorsements from the AFL-CIO, SEIU, and other unions.

As it turns out, Americans for Job Security is actually a spin-off of the U.S. Chamber of Commerce, the nation’s most robust business affiliation that has traditionally worked to elect conservative, pro-business politicians and judges is one of the strongest anti-union voices in American politics. The group also lobbied heavily against the Employee Free Choice Act legislation that Solis co-sponsored in 2007 as a member of Congress.

The Chamber of Commerce also says it is committed to “address[ing] energy, security, and climate change challenges,” but in reality, it orchestrates a campaign of misinformation on the issue of climate change that seeks to kill the most drastic (and likely most necessary) legislation in favor of business-friendly alternatives. I don’t doubt that the Chamber does a lot of good work, particularly for small businesses. But on issues like labor and global warming, it is part of the problem.