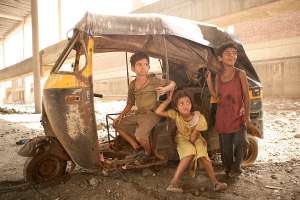 Their parents seem to think so. The mother of Azharuddin Mohammed Ismail—the 10-year-old who plays the lead character’s brother, Salim, in the Oscar-sweeping film—still lives lives with her son in a hovel made of tarps and blankets in Mumbai’s Behrampada shanty, where rats roam and sewage runs untreated. “He’s supposed to be the hero in the movie, but look how he’s living,” she told Australia’s Herald Sun. “We need money and help now. It is hard living like this. I am worried that after the Oscars are over they will forget us.”

And then there’s the movie’s other slum star:

Rubina Ali, 9, who plays the young version of Latika, the film’s heroine, lives nearby. Her shack is brightly coloured but an open sewer runs close by.

Her father, Rafiq Ali Kureshi, a carpenter, broke his leg during filming and has been out of work since.

“I am very happy the movie is doing so well but it is making so much money and so much fame, and the money they paid us is nothing. They should pay more,” he said.

But British director Danny Boyle says he’s trying to be smart about how he pays the child actors:

They said they paid painstaking attention to how Azharuddin and Rubina’s involvement in the film could be of lasting benefit over and above the payment for their work.

The children, who have never received formal eduction, have been enrolled in school since last June at the production company’s expense until they are 18.

Azharuddin and Rubina will receive a lump sum when they finish their education, and Boyle said money was in place to cover health care and emergencies.

They decided not to shower the children with cash because they could not handle it psychologically and practically.

For the most part, Boyle’s approach sounds wise. But in addition, why not give the parents just enough money to move out of the slums into a half-decent apartment somewhere? They certainly deserve it now that the film has grossed $155 million. And even if the adults blow the cash, it’s hard to see how that kind of modest aid would skew the kids’ priorities.

UPDATE from the Daily Mail:

The filmmakers also claim they have now agreed to buy apartments for the two children and allow the families to move in, with the stipulation that they will not own the property unless the youngsters complete their education.

Tonight, however, a spokesman for the film was unable to provide further details about the apartment plans.

UPDATE #2: The Hindu reports that the Oscars have apparently shamed the Indian government into giving flats to the families.